In the early 20th century, fashioned black people were often portrayed in an intentionally demeaning light as mammies, jezebels or the Jim Crow caricatures. Yet, in truth fashion and style has always been an important factor in the black community defining self-expression and identity.

Following the volatile events of the 30s and 40s, when money, food and jobs were in short supply, Britain and America began to flourish after the war. The 50s saw the rise of popular culture, driven by more leisure time and  an emerging youth culture. Morale was high, and clothing choices reflected social changes. 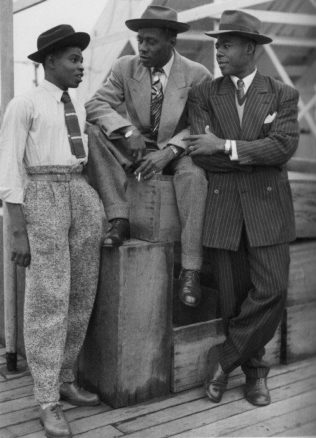 The dapper man of the 50s wore a casual suit jacket, with a structured shoulder, tapered trousers and two-tone shoes. Jazz musician Nat King Cole was the first African-American to host a primetime TV show. His slick back hair, suit jackets and slender ties complemented his smooth style. In 1954 the musical Carmen Jones was released, it featured an all-black cast. Leading actress Dorothy Dandridge oozed Hollywood glamour, her key look was a cinched in waist and short-cropped hair. Her leading man Harry Belafonte donned a fedora hat, classic white t-shirt and an army uniform. The film was instrumental in setting the tone for black fashion in the 50s. The Windrush migrants pictured arriving in the UK from the Caribbean look striking clearly influenced by American movie glamour.

The 50s was a time of social agility, the new emerging prosperity helped to create a widespread sense of steady progress. However, that consensus was a fragile one which splintered during the tumultuous 1960s.

The most divisive decade of the mid 20th century marked by the Vietnam War, the Civil Rights Movement, and protests and political assassinations. Unconventional music, art and fashion defined this rebellious decade. 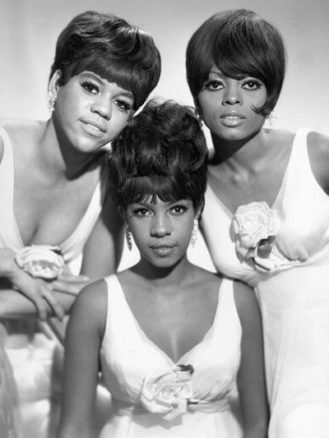 Women found new modes of femininity, the mini skirt became the epitome of the decade a symbol of freedom and liberation.  Equally new insights into identity and representation began to engage the black perspective. American radical activists the Black Power Movements developed. The co-ordinated outfits consisted of a black beret, black turtleneck, black leather jackets and a crown of Afro hair.

Leaders of the female Black Panthers Angelia Davis, Elaine Brown and Kathleen Cleaver inspired women to wear their hair natural and reclaim what Cleaver once described it as a “new awareness . . . that their own natural, physical appearance is beautiful,” the natural hair reflected pride in black identity.

In contrast, the image of popular music icons represented the tastes of a mainstream audience. At a time when black women were rarely seen on TV, The Supremes filled that void as the most visible female pop band of the 1960s. The fashion and musical icons exuded beauty, femininity and elegance representing black respectability. The matching glamorous gowns, heavy eyelashes and sleek hair solidified them as a class act.

The ’60s youth questioned conventions of the previous decade, restless with the status quo they experimented with fashion as a means of activism and difference.

One of the most revisited decades in fashion is the 1970s encapsulating numerous iconic styles that are still wearable today. From hippy and glam rock to disco and bohemian it was a melting pot of influences. Despite continued political unrest, the eclectic mix of styles from around the world was due to convenient travel, new retail chain stores and freedom of expression.

At this time Rastafarianism became popular, men and women wore dreadlocked hair, and the colours red, gold and green to signify their Rastafarian roots. Bob Marley, a Rasta who lived in the UK at the time, was the movement’s most visible proponent. In the US and the UK dashiki cloth, ankh and fez hats where worn adhering to an African centred consciousness.

Blaxploitation ’70s films are a visual rush of ultra-hip and flashy style. The characters were seen as caricatures and eventually condemned for stereotypical portrayal and glorification of violence. Despite the negative response screen siren Pam Grier made her mark wearing garish patterns, bell-bottoms, playsuits, platforms and sequined dresses. The Afro and no-nonsense attitude completed her iconic Foxy Brown character, her tagline “the baddest One-Chick Hit-Squad” and she owned it. 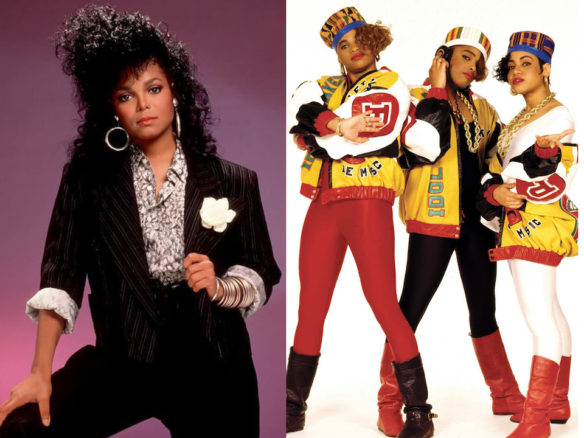 Distinctly different from the troublesome decades the ’80s is characterised as the decade of materialism and consumerism, the rise of the “yuppie,” blockbuster movies and the emergence of cable networks like MTV, which introduced the music video and launched the careers of many iconic artists.

Jamaican born Grace Jones epitomised the power suit with flat top hair and athletic body, she challenged the cultural idea of beauty, but she also expressed her power by embracing androgyny. Pop stars Whitney Houston, Janet Jackson and Tina Turner wore short body-con dresses with shoulder pad jackets along with big hair and bold makeup. Both men and women would use treatments to curly perm and relax (straighten) their hair.

Considered the golden age of hip hop young black youth related to the lyrical content, which often drew attention to a variety of social issues including Afrocentric consciousness, politics, and crime.

Fashion trends are a mirror to culture and as culture changes, fashion changes. Fashion and style are woven into black history indicating both separate and collective identities. Through clothing, individuals establish their sense of self as well as their place in society.

We protect and police 10,000 miles of track and 3,000 railway stations and depots every day. We police…

The University of Glasgow is ranked in the world’s top 100 universities. We tackle the world’s challenges with…

We want to be the place where everyone can fulfil their full potential. And we believe that supporting…