The Tudors reigned from 1485 to 1603 then the Stuarts from 1603 until 1714. Of interest is the fact that it is now also possible for many of the African Diaspora tracing their ancestry, to go back as far as the early 18th Century but we know virtually nothing of the African Diaspora before that period. Miranda Kaufmann’s book is most certainly revealing:

Miranda Kaufmann  gives us great insight and through diligent research she has unearthed some startling facts about our history. A history never before told in her new book:

BLACK TUDORS tells the stories of ten Africans and  traces their tumultuous paths during the Tudor and Stuart eras, uncovering a rich array of detail about their daily lives and how they were treated. She reveals how John Blanke came to be the royal trumpeter to Henry VII and Henry VIII: the trouble Jacques Francis got himself into while working as a salvage diver on the wreck of the Mary Rose; what prompted Diego to sail the world with Drake, and she pieces together the stories of a porter, a prince, a sailor, a prostitute and a silk weaver. 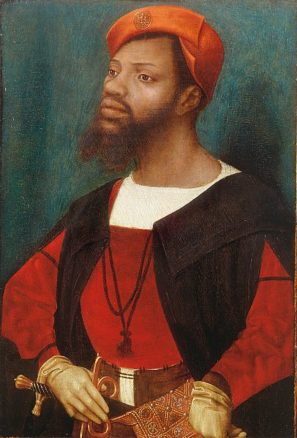 They came to England from Africa, from Europe and from the Spanish Caribbean. They came with privateers, pirates, merchants, aristocrats, even kings and queens, and were accepted into Tudor society. They were baptised, married and buried by the Church of England and paid wages like other Tudors.

Yet their experience was extraordinary because, unlike the majority of Africans across the rest of the Atlantic world, in England they were free. They lived in a world where skin colour was less important than religion, class or talent: before the English became heavily involved in the slave trade, and before they founded their first surviving colony in the Americas. Their stories challenge the traditional narrative that racial slavery was inevitable and that it was imported to colonial Virginia from Tudor England. They force us to re-examine the 17th century to find out what had caused perceptions to change so radically.

Introducing Black Tudors means a reassessment of our national story and what it means to be British today. They are just one piece in the diverse jigsaw of migrations that make up our island’s multicultural heritage. The knowledge that Africans lived free in one of the most formative periods of our national history can move us beyond the invidious legacies of the slavery and racism that blighted later periods in our history. BLACK TUDORS challenges the accepted narrative that racial slavery was all but inevitable and forces us to re-evaluate our shared history.

The Men and Women featured in the book
Black Tudors: The Untold Story

The two images of the court trumpeter John Blanke in the Westminster Tournament Roll of 1511 comprise the only known portrait of a Black Tudor. He was present at the court of Henry VII from at least 1507, and may have arrived with Katherine of Aragon in 1501, when she came from Spain to marry Henry VIII’s older brother, Prince Arthur. In 1509 he performed at both Henry VII’s funeral and Henry VIII’s coronation. He was paid wages and successfully petitioned the new king for a pay rise. He married in 1512, and was given a wedding present by Henry VIII, but after that he disappears from the records…

An expert swimmer and diver, both skills common to his native land, but extremely rare in Tudor England, Jacques Francis was part of a team hired to salvage guns from the wreck of the Mary Rose in 1546. When his Venetian master, Peter Paulo Corsi, was accused of theft by a consortium of Italian merchants based in Southampton, Francis became the first known African to give evidence in an English court of law.

Diego ran through gunshot in his eagerness to be taken aboard Francis Drake’s ship when it docked at Nombre de Dios in Panama in 1572. He forged an alliance between the English and the local Cimarrons (Africans who had escaped their Spanish captors to found their own settlements) that resulted in the capture of over 150,000 pesos of Spanish silver and gold. Following this lucrative adventure, Diego returned to Plymouth with Drake, whence they set sail together again once more to circumnavigate the globe in 1577 on the Golden Hinde. He was with Drake when he passed through the straits of Magellan, raided South America and laid claim to California in the name of Elizabeth I in 1579. Diego died near the Moluccas of an arrow wound sustained after a fight a year earlier with the Araucanians, who lived on Mocha island off the coast of Chile.

In 1596, Edward Swarthye whipped John Guye, the future first governor of Newfoundland. They were both servants in the Gloucestershire household of Sir Edward Wynter: Guye managed the iron works, while Swarthye was the porter. Swarthye had likely been brought home by Wynter after he captained the Aid on Francis Drake’s Caribbean raid of 1585-6, one of many Africans who fled their Spanish enslavers to join the English. The whipping was just one incident in an ongoing family feud between the Wynters and their neighbours the Buckes. Edward Swarthye appeared as a witness in the ensuing court case of 1597, his testimony confirming that he, a Black Tudor, had whipped a white man before a crowd assembled in the Great Hall at the Wynter’s home, White Cross Manor.

Reasonable Blackman made an independent living as a silk weaver living in Southwark c. 1579-1592. The silk industry was new to England but its products were the height of fashion. He had probably arrived in London from the Netherlands, which had both a sizeable African population and was a known centre for cloth manufacture. He had a family of at least three children, but sadly lost a daughter, Jane, and a son, Edmund, to the plague that struck London in 1592.

Mary Fillis was the daughter of Fillis of Morisco, a Moroccan basket weaver and shovel maker. She came to London c. 1583-4 where she became a servant to John Barker, a merchant and sometime factor for the Earl of Leicester. By the time of her baptism in the summer of 1597, she was working for a seamstress from East Smithfield named Millicent Porter. Porter died on 28 June 1599 but we do not know what became of Fillis. She was however present in London during a period which saw a succession of ambassadors arriving in England from her native land in order to negotiate alliances against the common enemy: Spain. 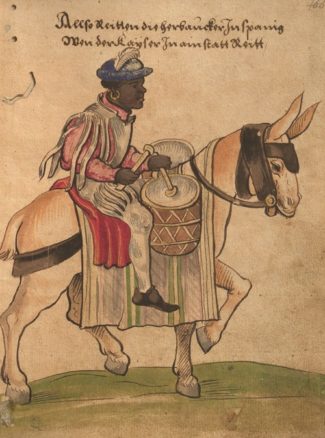 Jaquoah was the son of King Caddi-biah, who ruled a kingdom in modern-day Liberia known for its meleguetta pepper or ‘grains of paradise’ and ivory. He arrived in England aboard the Abigail in the autumn of 1610, and was baptised in the City of London church of St. Mildred’s Poultry on New Year’s Day 1611. He spent two years in England with John Davies, the leading Guinea merchant of the day, before returning home. In 1615, he received a delegation of East India Company merchants en route to Bantam. They reported that he spoke good English and made ‘great proffers and promises of trade’.

John Anthony was a sailor who almost certainly came to England with the pirate Sir Henry Mainwaring. In 1619 he was employed aboard The Silver Falcon on a voyage to Virginia. Had all gone according to plan he, a free, waged, sailor, would have been the first African to arrive in an English colony in mainland North America. However the ship only made it as far as Bermuda, where it acquired a cargo of tobacco in dubious circumstances, before docking unexpectedly in the Netherlands. A bitter dispute followed between the owner of the ship, Lord Zouche, and the principal merchant in the venture. This held up the payment of John Anthony’s wages but after petitioning Lord Zouche, he eventually received payment with interest in the spring of 1620.

Anne Cobbie was a prostitute who worked in the parish of St. Clement Danes, Westminster, in the 1620s. It was said that men would rather give her a gold coin worth 22 shillings ‘to lie with her’ than another woman five shillings ‘because of her soft skin’. She was one of ten women cited when the couple who owned the brothel where she worked were brought before the Westminster Sessions Court in 1626. The action was brought by one Clement Edwards, a clergyman from Leistershire whose wife had left him to work in the Bankes’ establishment. Anne Cobbie is exceptional: there is actually more evidence of African men visiting English prostitutes than vice versa at this time.

One of a number of Africans recorded in rural locations, Cattelena lived in the small Gloucestershire village of Almondsbury, not far from Bristol, until her death in 1625. An inventory survives of the goods she owned. Her most valuable possession was a cow, which not only supplied her with milk and butter but allowed her to profit from selling these products to her neighbours. No furniture is listed, which suggests she may have shared her home, perhaps with Helen Ford, the widow who administered her estate. Her possessions, from her cooking utensils to her table cloth, each tell us something of her life, but the fact that she had them at all tells us even more. Africans in England, like Cattelena, were not owned, but possessed property themselves.

Miranda Kaufmann will speak about her award-winning book on 28th February  2019 at the National Archives in Kew, London and on  13th  April 2019 in Canterbury. For further information see our National Listings Page or contact:http://www.mirandakaufmann.com

Can anyone help?
What was Mary Fillis’s Muslim name?

This is a really good website to be on because it explains everything perfectly and i appreciate all the hard work put into this because of all the things he wrote to tell us and imagine how long it took him or her to make this, thank you very much for all this information.

Sport – A Netball Legacy from 1978, A First Generation Achievement and Renewed Hope

The families who arrived in the 1950’s and onwards were no exception. By the late 1960s many were…

Four years after independence, larger countries had doubts over whether Jamaica’s infrastructure and personnel would be able to…

Brazil’s involvement in the Atlantic Slave Trade was largely receptive, as it was a colony of Portugal between…

As the democratically elected body that represents the interest of Wales and its people, we are dedicated to…

WATCH: University of the Arts London

University of the Arts London (UAL) is made up of six colleges: Camberwell College of Arts Central Saint…

We are an accessible and inclusive organisation that welcomes and respects the diversity of all our patients, carers,…

We are looking for bold and impactful ways to help young people find and keep good jobs. There…

West Midlands Police are committed to providing the best possible service to our communities, ensuring everyone has fair…

Today, Newcastle has a broad research base in the fields of medicine, science and engineering, social sciences and…