Against a backdrop of war wounds,  in 1963 a divided Europe was still suffering emotionally from the devastation of World War II and people were more open to discussing feelings and asking questions. Our hearts and minds then turned to the injustices of Segregation in America and Apartheid in South Africa.

I look back on being in the 250,000 strong crowd that heard the “I have a Dream” speech and wonder what prompted me to go there. That Summer I had been at a Summer School at Stanford University in California. Maybe I had got ‘radicalised’ during the time I was there; perhaps my experiences before 1963 pre-disposed me to attending the ‘March on Washington for Jobs and Freedom’.

I was in my last year at University. Between school and Oxford I had worked in a factory in Hanover, West Germany. Many of my fellow workers had been on the Eastern Front in the Second World War. One man I got to know was classified as 70% wounded. He had been in the Waffen SS and had taken part in a failed attack across a river. They had been forced to retreat and he had received his wounds from fellow German soldiers who had assumed they were American troops trying to fool the Germans in fake uniforms. ‘The Waffen SS never retreated!’  Many still had a hatred of Russia and couldn’t understand why the Western Allies hadn’t joined in with Admiral Doenitz to attack Russia. Doenitz had briefly succeeded Hitler as President and authorised the surrender of the German Armed Forces. As a counter to this Nazi propaganda, I used to go the ‘Amerika Haus’ in Hanover and read transcripts of the Nuremburg Trials detailing the Nazi atrocities.  So by the time I had got to University I had a good idea of racism in its most extreme form.

One of my friends at Oxford was Raficq Abdullah whose family came from South Africa. He explained the Apartheid system to me. Finally in my time at Stanford I became friends with a young White American who explained to  me how segregation worked in the Southern States particularly in Governor George Wallace’s State of Georgia – segregation now, segregation tomorrow, segregation for ever.

At the end of Summer School I drove across the States and went to stay with family friends in New Jersey. I told them that I wanted to go to Washington for the March. They tried their hardest to dissuade me, convinced I would be killed. Indeed, the authorities mustered 5000 National Guard and the Army had 19000 soldiers in the suburbs. Hospitals stockpiled blood plasma and cancelled non-urgent operations.

As it happened, the whole Event passed off quietly with a very friendly, almost holiday, atmosphere. I flew down to Washington and was there in time to join the back of the crowd. My main memory was of the singing. The crowd sang and professional singers provided the ‘entertainment’. Mahalia Jackson; Marian Anderson sang “He’s got the whole world in his hands”; Joan Baez sang, “We shall overcome”; Peter, Paul and Mary sang, “If I had a hammer”; Bob Dylan sang “Blowin’ in the wind”. And we all joined in.

Finally, after endless speeches, Dr. Martin Luther King made his great “I have a Dream” speech. It was one of the greatest speeches of all time. But I cannot honestly say that I ‘got it’ on the day. It was a huge crowd stretching down from the Lincoln Memorial. The speeches were relayed on little Tannoy speakers. The system had apparently been sabotaged the day before and the U. S. Army Signal Corps had worked overnight to repair it.

The upshot was that it is easy to tell if someone really was there. If they say it was fantastic and the speeches were so moving as they heard every word – they were not there. It was all a bit of a muddle but the big thing was just to be there and to be part of that huge enthusiastic crowd.

Did it change my life?

Shortly after leaving University I was elected to the Brixton Council on Community Relations.  Many years later as Chair of the Wates Foundation I was involved in funding many BME groups in South London. In 2007 I got involved in the celebrations for the Bicentenary of the Abolition of the Slave Trade. My wife is a distant descendant of William Wilberforce, the great Abolitionist. I co-commissioned a piece of music from the eminent Black Composer Errollyn Wallen for performance at Holy Trinity Church, Clapham Common, the home of the Clapham Sect of Abolitionists. 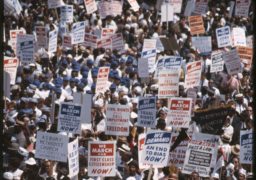 As a postscript: a couple of years ago I lost my wallet in Louis Armstrong Airport in New Orleans. Lost Property was claimed at the Airport Police station. I was so pleased and relieved to get my property back that, remembering how it was in 1963,  I asked if the Laws of the State of Louisiana permitted me to give the lady behind the desk a hug. She agreed that indeed they did. I then pointed out to her that she had just been hugged by someone who had heard Louis Armstrong perform in 1961 and Dr. King give his speech in 1963. “Hey, fellah”, she said. “Let me give you a great big hug”. Dr. Martin Luther King Jr. would surely have    approved!

Rev. John Wates OBE is a prolific protagonist for change and is known for his charitable services for social injustices in the criminal sector and services to the arts sector. He is a trustee of the Rehabilitation for Addicted Prisoners Trust and former Chairman of the Wates Foundation. Rev. John Wates gives us an insight into that great day from his perspective.

Bayard Rustin: A Gay Man in the Civil Rights Movement.

He was born and raised in Pennsylvania where his family was involved in civil rights work. In 1936,…

Black troops were welcome in Britain, but Jim Crow wasn’t: the race riot of one night in June 1943

Bullet holes found in the wood surrounds of the NatWest Bank in Bamber Bridge, in Lancashire in the…

Proclaiming a black nationalist “Back to Africa” message, Garvey and the UNIA established 700 branches in thirty-eight states…

Martin Luther King, Jr.’s “I Have A Dream” Speech