Almost 120 years after it gained currency, history consultant Kwaku argues that if pan-Africanism is not to atrophy into nothing more than a topic confined to political discussion and academic discourse, Africans, particularly African leaders must capture the imagination and support of their people by putting forward bold pan-Africanist visions, with a belief and determination to bring them into reality.

The alternative, he contends, is the begging bowl mentality which sinks African nations on the continent and the diaspora deeper into debt-trap and lack of sovereignty. Taking the subject outside academia and political meetings, BTWSC/African Histories Revisited, TAOBQ (The African Or Black Question), Friends Of Marcus Garvey Bust Collective and Brent Museum and Archives invite you to join the third Marcus Garvey Annual Pan-Africanism Presentation – ‘Highlighting Pioneering Non-Anglo Diasporan And Continental Pan-Africanists’/’Where Is The Pan-Africanism Vision?’. 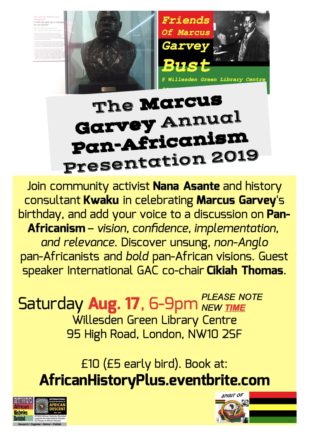 Although the concept of pan-Africanism has a long history, its well-known pioneers have generally been drawn from the Anglo diaspora – names such as Henry Sylvester Williams, WEB Du Bois, Marcus Garvey, George Padmore, and Amy Ashwood Garvey, stand out. However, in her short audio-visual presentation ‘Highlighting Pioneering Non-Anglo Diasporan And Continental Pan-Africanists’, community activist Nana Asante will highlight some of the unsung pan-Africanists from the non-Anglo diaspora, such as Haiti, and from the African continent and the Caribbean, who deserve to be better known.

Using as a starting point the vision and blurb for Dr Kehinde Andrews’ ‘A Radical Vision Of A New Africa’ BBC Ideas video, which
is described as a “provocative vision for a future newtopia – a world where Africa is the ‘promised land’,” Kwaku posits that this utopian vision is achievable to a large extent, if Africans, particularly leaders, will identify with their commonality as Africans, have confidence in self and bold, pan-Africanist visions. Kwaku aims to show what can potentially be achieved if we have pan-Africanist leaders with vision, by screening Andrews’ and other videos to explore practical steps that can help bring bold visions towards reality.

Garveyites, non-Garveyists, and young people are invited to celebrate Garvey’s birthday and to participate in this community discussion on August 17, 6-9pm at Willesden Green Library. For more information or to book: AfricanHistoryPlus.eventbrite.com.

If you have the integrity, skills and strength of character we’re looking for, this fast-paced role could be…

The Government Property Agency is recruiting a Commercial Director

We are changing the way the Civil Service works and are at the forefront of Government’s transformation agenda; reshaping…

Bedfordshire Fire and Rescue Service values the benefits that differences between employees can bring to our organisation. We…

Start your adoption journey with us today. We are your local specialist adoption agency and charity with 110…

Equality and Diversity Valuing difference is a core organisational value for South Yorkshire Police (SYP). This drives how…