This unique resource pack will celebrate the enormous contribution Black Britons have made to our vibrant and diverse society.

Our culture has been enriched and our society has been made stronger because of the people who travelled here to build new lives in the UK, as well as the achievements and contributions of their descendants.

The Black History Month Resource Pack 2019 is available to all organisations in the public, private and voluntary sectors who would like to honour the contribution made by Black Britons and actively celebrate Black History Month. It’s also the perfect opportunity to visibly demonstrate your commitment and support to the wider Diversity, Equality and Inclusion agenda. 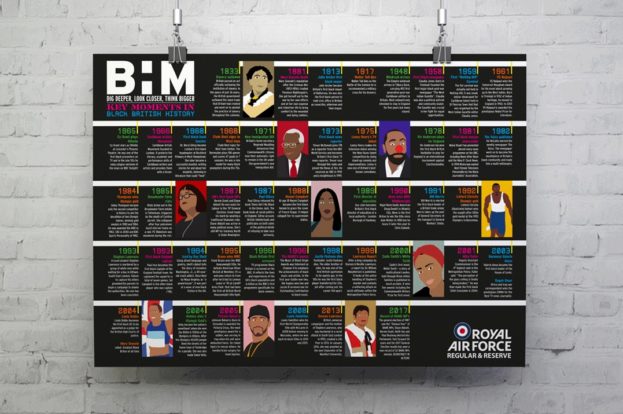 Special Offer – Buy 3 Resource Packs and get a 4th Free.

Please email us at:
packs@blackhistorymonth.org.uk

Just received the pack I must say its excellent. Congratulations and well done.

Finally something useful to help us promote black history in our school. This is excellent.

Do you mail internationally?

I work for a Public Sector organisation, that is not a school. Please can you confirm if there is an organisation pack in addition to the School resources pack? If not what would it cost to get the pack minus the school material .

I have a similar query to the one that Abi raised previously regarding organisation pack?

I have emailed you guys twice enquiring about buying a pack, however no one has yet to get back to me? Can you please email me at your earliest convenience.

Please can the response to the message from Abi on 22/08/2019 be published too as I think it would be useful for everyone to see – my question is basically the same.

Hello,
Is there any chance, next time you could include a resource in MFL too that shows the impact / history of colonialism from e.g. French in North Africa for example so that we really use across the whole curriculum?

Why is this not a free school resource

HI there
Please can you send the link to purchase the resource as we have emailed as well.Looking forward to the pack
Regards
Winni Smith

I echo Charlene – it does seem very expensive in a time of austerity, but should be in every school

I am writing regarding a BHM poster that my organisation obtained from your organisation in which figures in our community have been depicted in caricature form. I would be very interested to understand what was the brief for this project / who set the criteria or perhaps put it forward in celebration of this BHM?

It just strikes me that something of such importance should be reflected in a more meaningful way mindful of the difficulties that have been experienced around the world at large and more so in our community.

Whilst I do believe that no offence was intended, it crossed my mind whether to depict those who had to endure the struggle for many years including Rosa Parks and Nelson Mandela (to mention a few) in such a cartoonish manner is to flag the lack of understanding of the overarching cultural context as the struggle was real for some of those listed on the 24 chosen faces for this years BHM celebration poster which my organisation used having obtained this from your organisation.

It may well be that there isn’t a cause for concern here and I am being overly mindful of this matter in which case please do feel free to ignore my views expressed above. However, just before you dismiss this email I would add that I have randomly asked other colleagues of BAME disposition at my workplace what they thought of the poster and like myself they are perhaps questionably not impressed.

I think that the concept (the poster with the faces of some greats) is a good one but it’s just the use of cartoon effects to depict those individuals of national and international importance to so many which makes me question whether your organisation fully grapples with the continuing underlying concern of being of BAME inclination in this country.

When my organisation put the poster up to highlight BHM to the thousands of us, I was saddened as regrettably I did not see the artistic excellence in reflecting these characters and in fact I wondered whether those of other cultural dispositions would take this month seriously given it was a portrayed as a sort of joke on behalf of our community. We simply cannot make light of these matters.

I would add that I did reflect on whether it would have ever been acceptable to portray Sir Winston Churchill or others of such importance in like manner (particularly given the intention which I do hope was or is to inform the workforce / community at large) and I trust that I will be excused for speaking up, being disappointed / objecting to the use of caricatures to depict BAME or any heroes of any persuasion for that matter.

In my view, this is one of the reasons why the world continues to be slow in moving forward as we undermine the significance of the struggles of the past which have added to inform the celebration of this month and shows our detachment from how matters like this can be viewed by the wider community.

My organisation kindly flagged that it would be best to highlight my views to you at this point which perhaps could feature in your planning for the future.

I welcome your feedback.

Hampshire Constabulary is committed to the aim of creating a diverse police service, which reflects the community it…

We’re at the heart of the justice system, working together to bring the principles of justice to life…

A lot has changed since Stephen Lawrence’s murder in a racist attack in 1993. But some things have…

We’re a Reading based charity helping children, many orphaned as a result of AIDS, and their guardians in…

As the democratically elected body that represents the interest of Wales and its people, we are dedicated to…