Even the very real threat of German U-Boats couldn’t deter him, anywhere was better than small-island, no-opportunity, boring Grenada. Via a harrowing mid-winter Atlantic crossing he was lucky to survive, Darwin disembarked in Liverpool to a city reeling under the onslaught of the Blitz. Throughout the war he worked as a machinist in the munitions industry, manufacturing the iconic Lancaster Bomber at the Metrovicks factory in Manchester, prime target of the Luftwaffe. 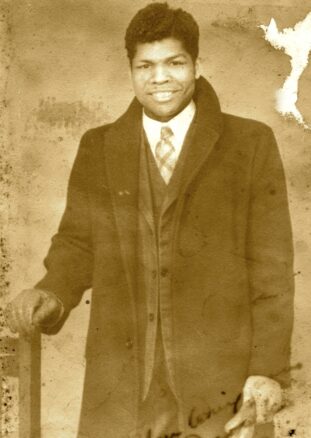 After the war our father stayed on in England, one of the few Black immigrant pioneers, enduring stares from children on the street and quizzical looks from landladies, wondering if he’d blacken her sheets. In 1949 he qualified as a teacher, married Scottish nurse Helen Hogan and my eldest brother Gerry came along shortly thereafter. In 1950, two years after the Empire Windrush had given birth to a flood of West Indian migration to England, our father went in the opposite direction: home. He and his new family took ship from Southampton to Grenada: a man on the up. Pity it wasn’t to last.

Ten years later in Trinidad our mother did a moonlight flit, deserting the family she had co-created and thrusting her three young sons into the sole care of their woefully unprepared father. To say our father was unprepared was putting it mildly, he was in a state of shock. But there was one thing he would never do: abandon his children.

After a decade back home in the Caribbean, our father decided it was time to rejoin the Windrush generation. When we disembarked on Liverpool Docks that freezing morning in August 1960, I’d just turned seven and England would be the fourth country I’d lived in. We were an odd bunch: an all-male family with no mother, sisters, cousins, aunts, uncles, grandpas nor grandmas. What was so strange about that?

Unlike most of the Windrush generation, our family journey didn’t end when we got to England. In fact, that was just the beginning …

I was born in Grenada in 1953 in a house called Eden. Two years later we left Grenada, and I’ve been moving ever since. Thus far I’ve lived in ten countries, several of them several times. After growing up in London of the sixties I grew up again in Jamaica of the seventies: heady days of Marley and Manley, reggae and radicalism – with occasional bouts of murder and mayhem thrown in. In Jamaica you will have the best of times but you will also have the worst of times. Enjoy the first because you can’t escape the second.

For two decades I worked for the World Bank, perfectly suited to a nomad like me. I hauled my family through some interesting times, including the violent meltdown of Zimbabwe under Mugabe. In 2008 I stepped off the bandwagon and returned to Grenada, my home I never knew. As it turned out, it was an inspired decision.

I recently spoke with someone in Liverpool whose father also arrived in England after navigating the seas with German U-Boats. I’ll check to see if it was the same arrival date and time.

This man is still resident in Liverpool.

Bryan, I must admit that your story is rather unusual. Your father was atypical for a West Indian man for he chose not to abandon his sons unlike the myriad of Caribbean men who are sexually irresponsible. He gave you the love to see distant lands and your sense of stability amid your wanderlust urges. I saw your interview on Spiceislander Talkshop and thought that you seem settled and sure of your return to Grenada. In the 70s, the Caribbean was promoted as a place that lacked the opportunities to advance in life. We lost many good people during those years. You went back and help to build the countries. I wished I had seen it that way as well, but we weren’t taught that way. Please put your book on Amazon so I could buy it.

For whom the bells toll

The British Army – A LEGACY OF VALOUR

Black History Month 2018 coincides with the 100th anniversary of the Armistice; a fitting time to reflect on…

Despite this significant contribution by many thousands of soldiers, recognition of their bravery and sacrifice has been limited…