Contrary to popular belief the increased migration to England post war, was not solely the result of peoples from the Commonwealth countries (former British colonies) wishing to seek a better life for themselves: In the case of Nurses, midwives and other care staff, there was also an active invitation from the British government to come to England and help staff the newly formed National Health Service.

The National Health Service had been formed in July 1948, following the dedicated campaigning, planning and sheer hard work of Aneurin Bevan who envisioned a high quality health service for all citizens in Britain, free at the point of need. However, it became clear very quickly that in the aftermath of WW2, there was a shortage of qualified health care staff to fulfil the ever increasing demands for this neophyte national health service – The answer?  To turn to the British Commonwealth, and its peoples. 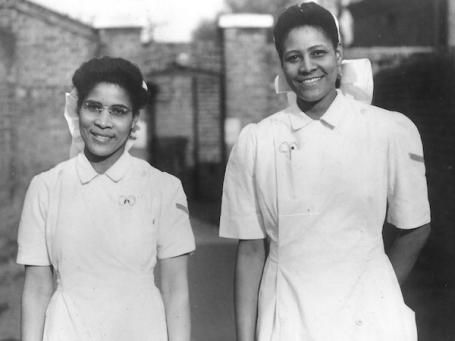 African Caribbean nurses arrived en masse to Britain, alongside other skilled and unskilled workers with the arrival of the HMS Windrush and other ships from July 1948 – and have been major contributors to the British NHS since its inception. The arrival of nurses and new trainees to help bolster the workforce in the UK was crucial. Without their input, it is likely that the NHS would not have survived, failing before it really had time to be established. Britain simply did not have the workforce required to run the service. However, despite being invited by the British Government, no preparation had been made to receive them and the British people themselves were unprepared for the influx of large numbers of migrants. As a result, far from the welcome they expected, these, nurses, midwives and other workers were introduced into a largely hostile social and work environment. There are many stories of the challenges faced by black people of the ‘Windrush generation’ – experiences of racism, isolation and rejection as they tried to fulfil the duties they were assigned. Many found that their qualifications from the Caribbean were not validated in GB and had to work twice as hard to ‘regain’ the recognition and professional levels they arrived with. Sadly, many never did.

As we move to 2018, we celebrate the 70 year anniversaries of both the founding of the NHS and the landing of Empire Windrush on British soil.

In October 2017 I wrote a poem to reflect, recognise and celebrate the contributions made by Black Nurses to the health system of England post World War 2. I happened to share it with My son: Musician Rob Green – who in turn shared with the very talented music Director Christella Litras….And last week I sat in awe as my words were transformed into a haunting piece of spoken word, set to music by Christella and danced with perfection by performers from the Phoenix Dance Theatre managed by Sharon Watson.

But more than my own personal pride, this poem shines a light on the hardships, prejudice and challenges faced by the brave men and women like my parents who responded to the call from England to leave their island nations and rebuild “The motherland” after WW2 – a sense of duty, of pride and responsibility which no only saved the NHS but changed the shape of Britain, themselves and their families forever.

For those who wanted to hear the whole poem…here it is.

I dedicate it the ancestors and those like my parents who braved the seas, and answered the call.

In ships bigger than anything we had seen,

dwarfing our islands and covering them

in the shadows of smoke and noise.

traveling to the ‘motherland’

– over weeks, over oceans that threatened to engulf us.

Driven by a wish, a call to save, to rebuild

and support efforts to establish ‘health for all’

in the aftermath of war.

Women and men of position in our homelands;

nurses with a pride in the excellence of our care.

With experience of management, organisation

and a sense of duty.

Smiling and eager to work on the wards, communities and clinics

encased in our skins – of a darker hue.

Which had shimmered and glowed

in our sunnier climes..

But now signified our difference

All the while striving to fulfil our promise

The blue of the sister’s uniform

– seemed as far away from us as the moon.

Unreachable by our dark hands in this cold land.

But we were made of sterner stuff.

The hot sun, which once beat down on our ancestors,

when they too left their lands,

Forging our hearts and minds

with the resistance of Ebony.

from the heat of rejection.

We cared, we worked and we organised.

Until the quickness of our brains

and the excellence of our care

made it hard for you to contain us.

And slowly, so slowly,

the blue uniforms had dark and lighter bodies beneath them.

The professional care in our touch

was valued despite the strangeness of our speech

and the kinks in our hair.

A new millennium – new hopes spread across this land.

the varied, diverse and vibrant nature of these shores.

Challenging and reflecting on leadership for health.

Moves to melt the ‘snow’ at the peaks of our profession.

Recognising the richness of our kaleidoscope nation.

Where compassion, courage and diversity are reflected

In our presence and our contribution:

Not only the hopes and dreams of our ancestors.

Remember, it was us, who came.

Fantastic! Brilliant!! Great poem. This is a reality. Could we have the contact of the writer please or how we can promote the poem/story.

It’s an awesome paragraph in support of all the
internet viewers; they will obtain benefit from it I am sure.

Great post. I used to be checking continuously this blog
and I’m inspired! Very useful information particularly the final part
🙂 I handle such information a lot. I was seeking this certain info for a long time.
Thank you and best of luck.

Just what I was looking for, regards for putting up.

Very inspiring. I would like to promote this information and poem on my next windrush display. Where can i get copy.

I have seen a video based on this poem. Is there a link to it please?

Can i use this for a display ?

Am I able to display this poem on our intranet page please? I work for NHS.

I am moved to tears. A beautiful, heartfelt poem.

I know this site presents quality dependent posts and additional
material, is there any other web site which offers these kinds of stuff
in quality?

What a wonderful tribute to the nurses who came over from the Caribbean, one of whom was my own mother, arriving in 1954 and became a midwife.
Reading this I was overcome with emotion.

It’s great remembrance for those who dedicate their lives. They came over from Carribbean to serve as they heard the called.
I am very move with tears.
May God bless their generation.

Marrying in 1913, Marcus Bailey was a Barbadian born migrant who found himself in England, coupled with an…

Homecoming: Voices of the Windrush Generation with author Colin Grant

Colin Grant is a historian and author of four highly praised books, he is an Associate Fellow in…

My Mother, Jamaica, Windrush and Me

The article said that it took 13 years for the victim to be recognised as a legal citizen….

Today marks the anniversary of the arrival of HMT Empire Windrush in 1948, carrying hundreds of people from…