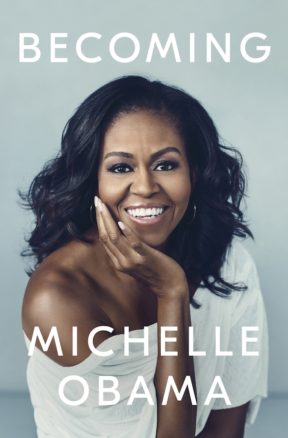 Her recent visit to London attracted unprecedented crowds of thousands as the most anticipated book of the year hit the shelves. As we look forward to her next visit in April this year Black History Month reviews her book which gives a unique insight into the White House, the first African-American First Lady married to the first African-American President of the United States, her family life and much more.

AN INTIMATE, POWERFUL, AND INSPIRING MEMOIR BY THE FORMER FIRST LADY OF THE UNITED STATES
In the epilogue to her book BECOMING she says “I’m an ordinary person who found herself on an extraordinary journey. In sharing my story, I hope to help create space for other stories and other voices, to widen the pathway for who belongs and why.”

An ordinary person who found herself on an extraordinary journey,  the former First Lady of the United States of America Michelle Obama is one of the most talented and admired women in the world. As First Lady—the first African American to serve in that role—she helped create the most welcoming and inclusive White House in history,  establishing herself as a powerful advocate for women and girls in the United States and around the world, dramatically changing the ways that families pursue healthier and more active lives whilst standing with her husband as he led America through some of its most harrowing moments.

In her strikingly candid and honest memoir, BECOMING, Michelle Obama invites readers into her world, chronicling the experiences that have shaped her—from her childhood on the South Side of Chicago to her years as an executive balancing the demands of motherhood and work, to her time spent in the White House, and to her transition back to being a private citizen.
With warmth and wit, Mrs. Obama describes in BECOMING her triumphs and her disappointments, both public and private, telling her full story as she has lived it—in her own words and on her own terms.

She shares personal stories about various aspects of her life including:

Reflecting, as exemplified by her speech at the 2016 Democratic Convention (“When they go low, we go high”), she leaves the White House in full command of her voice and her story, channeling the lessons she’s learned throughout her life to call on our best instincts at a time when we needed it the most

Her thoughts about her transition from First Lady back to private citizen, as she embarks on a new chapter in her life journey and seeks to continue to positively impact the lives of others around the world. “It’s not about being perfect,” she writes. “It’s not about where you get yourself in the end. There’s power in allowing yourself to be known and heard, in owning your unique story, in using your authentic voice. And there’s grace in being willing to know and hear others. This, for me, is how we become.”

This is Michelle LaVaughn Robinson Obama’s story of becoming. It is a story of hope and optimism, one that chronicles the still-unfolding journey of a girl from the South Side of Chicago whose life has been filled with highs and lows, extraordinary opportunities, and ordinary moments that have proved definitive to whom she has become.

A global publishing event, BECOMING is published in the UK and British Commonwealth territories by Viking, an imprint of Penguin Books at Penguin Random House UK. An audio format of the book, read by Mrs. Obama, is available in digital and physical formats by Penguin Random House Audio.

Becoming is the autobiographical memoir of former United States First Lady Michelle Obama.  The author describes it as a deeply personal experience as she  talks about her roots,  how she found her voice, as well as her time in the White House  and her role as a mother. It is available in leading bookstores.