The Mangrove Nine were a group of British black activists tried for inciting a riot at a 1970 protest against the police targeting of The Mangrove, a Caribbean restaurant in Notting Hill, West London.

They were Frank Crichlow, Darcus Howe, Altheia Jones-LeCointe, Barbara Beese, Rupert Boyce, Rhodan Gordon, Anthony Innis, Rothwell Kentish, and Godfrey Millett. All of the nine were arrested and charged with incitement to riot for their part in the 1970 protest in Notting Hill.

Their high-profile trial in 1971 at the Old Bailey lasted for two months finishing with five of the defendants being completely acquitted. Most strikingly, the case made legal history when it delivered the first judicial acknowledgement of ‘evidence of racial hatred’ in the Metropolitan police force. 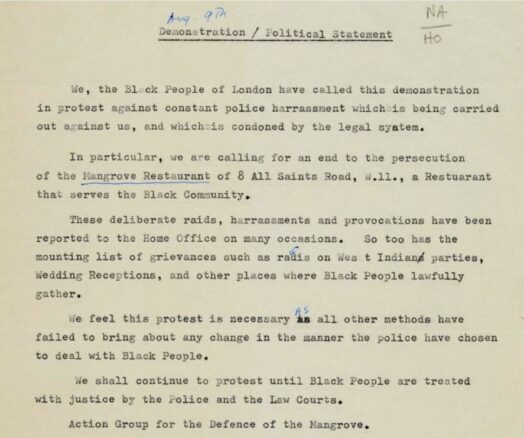 This is what happened.

Looking for cheap accommodation, many Windrush migrants, people arriving in the UK between 1949 and 1971 from Caribbean countries called Notting Hill home.

As more and more Caribbean’s moved there, one enterprising Trinidadian called Frank Crichlow, decided in 1968 to open a restaurant called The Mangrove.

When the restaurant started Frank wanted it to be an upmarket restaurant with black leather furniture and all the waiters and waitresses wore white suits and straw hats.

It had murals of mangrove trees on the walls, and cooked spicy West Indian food and wicked pineapple punches and was an instant success.

Soon the news spread, and the restaurant started to attract an array of A-listers including Jimi Hendrix, Diana Ross, and Marvin Gaye. Even Bob Marley who was recording close by, would pop over.

It soon became a home for the Caribbean community as well, however, in 1969 two days before Christmas, the local council suddenly withdrew Frank’s license to operate as an all-night café. Frank complained claiming to be a victim of unlawful discrimination.

All Saints Road and the Mangrove were popularly known as “the frontline” and people associated the term with drug dealing.

One of the reasons given to Frank for his license removal was that “people with criminal records, prostitutes, and convicted persons” used the Mangrove.

“My restaurant is patronised by respectable people,” wrote Frank on the Race Relations Board complaint form. He also said his premises had been “unlawfully raided” by police on two occasions.

With his new restricted license, Frank felt he was under close scrutiny.

It soon became a hub for Black people in the local area and caught the attention of the police, who began to repeatedly raid the Mangrove under the pretense of drug searches.

“Since the decision of the council, police cars have been outside the restaurant almost every night, I assume to check I am complying with the regulations,” Frank wrote in another letter in early 1970.

“Not once did they ever find evidence of ‘drugs, pimps, and prostitutes’ as one policeman said of us who inhabited the Mangrove,” recalls Barbara Beese one of the Mangrove Nine.

She says the police appeared to resent the restaurant’s popularity – especially with its high profile and famous customers. “To the police, Frank was a Trinidadian businessman gaining too much influence.”

The police would turn up looking for drugs, but everyone knew Frank was anti-drugs – you most certainly could not go there if you had a reputation for being dodgy or selling weed.

In the following months, the police raids persisted. They were “harassing the black community with impunity”, says Barbara.

Frank looked for support from the local Caribbean community and the newly formed British Black Panthers anti-racist group – which was inspired by the radical political organisation, the Black Panther Party in the US.

A group called “The Action Committee for the Defence of the Mangrove” was created and preparations for a protest march began.

The building quickly became a makeshift hub for community activism.

“You had the restaurant upstairs, but downstairs people were busy preparing placards for the march,” says 79-year-old Clive Phillip one of Franks friends.

Before the protest, the Mangrove committee wrote an open letter to Prime Minister Edward Heath and others.

It said the many “deliberate raids, harassments and provocations” by the police had been reported to the Home Office on many occasions but had fallen on deaf ears.

“This protest is necessary as all other methods have failed to bring about any change in the manner the police have chosen to deal with black people.”

Peaceful March Turned into a Riot 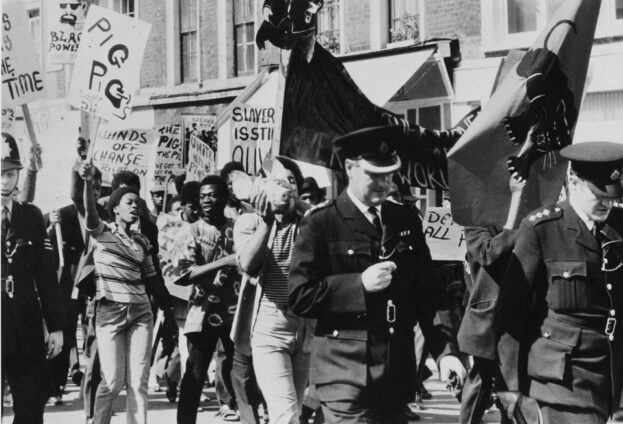 On August 9th, 1970 just after lunchtime a crowd started to gather outside the Mangrove and what started out as a peaceful protest march ended with 24 officers injured and 19 arrests.

Nine individuals including Frank Crichlow were charged with incitement to riot and affray. Eventually, the riot charges were dismissed because police statements were thought to be contradictory.

According to a Sunday Times report in early 1971 a central point to the prosecution’s case was the protestors had allegedly shouted and had banners stating “Kill the Pigs” a Black Power anti-police slogan imported from America.

The words were evidence of violence said prosecutors and so the director of public prosecutions decided to reinstate the charges, and the defendants were rearrested.

The case became historic as the first instance of the high-ranking Central Criminal Court—known familiarly as Old Bailey—acknowledging racism within Scotland Yard.

Only seven minor counts were found proven. The high-profile trial lasted for two months finishing in December 1971 with five of the defendants being completely acquitted. Most strikingly, the case made legal history when it delivered the first judicial acknowledgement of ‘evidence of racial hatred’ in the Metropolitan police force.

The case also marked a major milestone in the fight for civil rights within Great Britain.

Police harassment of Crichlow continued, however. In 1979 he was charged with drugs offences but was again cleared. In 1988 Mangrove was raided again by police and Crichlow’s bail conditions prevented him from going near the restaurant for a year. It never recovered from his prolonged absence, and ultimately closed. Frank died in 2010.

Now 50 years later a BBC drama called The Mangrove Nine, portrays interviews with the defendants recorded before the final verdicts were delivered at the trial, as well as

I was a witness to police harassment in Ladbroke Grove and Portobello Road at that time. I was in the company of black youths when the plain clothes police descended on the area and verbally abused them, insulting and goading them, instigating anger with offensive remarks about their origins.
Although i was called to give evidence at the trial, unfortunately the ‘powers that be’, decided not to call me.
I often visited the Mangrove and could have vouched for their good reputation as a young white girl, but, obviously that wasn’t what the prosecution wanted at all.

What was behind the Bristol bus boycott of 1963?

A spring afternoon in 1963. Eighteen-year-old Guy Bailey arrived on time for his job interview. Bailey was well…

Proclaiming a black nationalist “Back to Africa” message, Garvey and the UNIA established 700 branches in thirty-eight states…