He became one of the first black men to join the British Army when he was enlisted as a rifleman in the Middlesex Regiment where he became the first black man to join the regiment. and he fought in the battles of Loos, the Somme being wounded at both, before then being part of the fighting in the Dardanelles.

For his service, George was awarded a Meritorious Service Medal (MSM) usually given to non-commissioned officers of the British armed forces for distinguished service or gallantry. He also earned a reputation for throwing German bombs back over into German lines.

After the war he settled in South London where he earned a living as an electrician, a trade he had learnt in Trinidad, and also became heavily involved with the post-war welfare of soldiers, campaigning on behalf of The National Federation of Discharged and Demobilised Sailors and Soldiers, founding a local branch of the British Legion – George remained active in the British Legion until his death.

He would go on to lead thousands of ex-servicemen in a march demanding improved rights and higher pensions. As well as campaigning for ex-servicemen in 1931 he also became a founder member of the League of Coloured People (LCP) having experienced racism and bigotry despite his war record. Becoming a member of the LCP’s executive committee campaigning against racism and for the rights of the black community.

Despite being 50 as war once again appeared on the horizon George volunteered in 1938 for the Auxiliary Fire Service (AFS). The role of the AFS was to support existing fire brigades in the event of a new conflict. 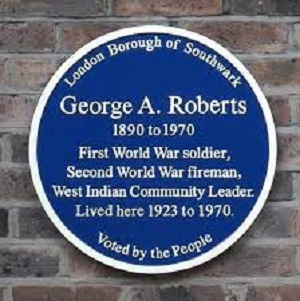 George was stationed at New Cross fire station in southeast London from 1939, where he served throughout the Blitz, being promoted to Section Leader in 1943, and would remain for the rest of the war. While George served at home his sons, Cyril and Victor would both serve with the British Army, Cyril in the Queen’s Royal Regiment before his capture during the Dunkirk evacuation, and Victor in the Royal Artillery.

In 1944 as part of the King’s Birthday Honours List George was awarded the British Empire Medal “for general duties at New Cross Fire Station” and for his part as a founder and pioneer of the fire service’s Discussion and Education groups.

George passed away at King’s College Hospital in 1970 but his memory lives on. On 11 September 2016, in a scheme led by the Southwark Heritage Association, a Blue Plaque was erected in his honour, as the first black man to serve in the army and fire brigade. The plaque is on the Lewis Trust Dwellings in Warner Road, Camberwell, in the London borough of Southwark, his home until his death.

In 2018, a plaque was unveiled outside New Cross Fire Station to commemorate his life and work for the service. George’s story also featured in a speech that Prime Minister Boris Johnson gave on 1st October 2020, to mark Black History Month, where he praised him for his contribution to British society, both through his service in the First World War, and his work in the Second.

At the end of the war, Charles remained in Liverpool where the Black community had grown to 5,000…

Although little is known about Blake himself, he would be one of thousands of black seamen from all…

Harold would be one of three children with a brother called Gordon and a sister called Ada. After…

Born in British Guiana (now Guyana), Gershom lived in rural Bagotsville, he was officially too young to enlist…