As a member of the Windrush Generation it meant a lot to me to be at the unveiling of the National Windrush Monument at Waterloo Station in London last week, on 22 June, the date that also marks national Windrush Day. The sculpture, by artist Basil Watson, captures the bravery of the first pioneers who travelled from the Caribbean to the UK, pioneers like my parents. It portrays a man, woman and child dressed in their ‘Sunday best’ clothes, climbing a mountain of suitcases hand in hand.

The Windrush Generation and their descendants all have their own unique story to tell of course, including Basil Watson. Watson’s parents travelled from Jamaica to the UK as part of the Windrush Generation during the 1950s, with his father, the painter Barrington Watson, coming to study art at London’s Royal College of Art from 1957 to 1960.

“In trying to figure out how to depict a generation that spans four decades, I thought: where along that line do I pitch the design? I decided to start at the beginning, that’s where everything starts and moves forward. The suitcases represent the family’s belongings and culture, everything they brought with them.” 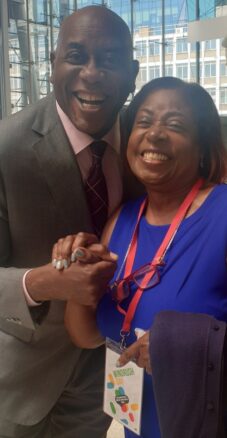 The audience watching the unveiling ceremony captured the huge contribution the Windrush Generation and their descendants have made to the UK ever since. The many household names we saw and spoke to represent every sector of British society, including campaigner Baroness Doreen Lawrence, politician David Lammy MP, entrepreneurs Levi Roots of Reggae Reggae sauce fame and Wilfred Emmanuel-Jones MBE (better known as the Black Farmer), celebrity chef Ainsley Harriot MBE, EastEnders actor Rudolph Walker CBE (aka Patrick Trueman), businessman Timothy Campbell MBE (winner of the first series of The Apprentice) and Rose Hudson-Wilkin MBE – the first Black woman to become a Church of England Bishop, currently the Bishop of Dover and formerly a spiritual adviser to the Queen.

The event, which lasted around 1.5 hours, also attracted large numbers of onlookers, including members of the Windrush generation, their descendants, travellers using the station’s rail services that day, and other members of the public. They stood by the railings, keen to get involved and catch the first glimpse of the statue. It was live-streamed across the country and online too, including at Birmingham New Street Station and the National Railway Museum in York.

Baroness Floella Benjamin, the chair of the Windrush Commemoration Committee, said the monument would provide a permanent place of reflection, celebration and inspiration for Caribbean communities and the wider public.

“It will act as a symbolic link to our past and a permanent reminder of our shared history and heritage for generations to come. I hope it will be a catalyst for other monuments across Britain commemorating the extraordinary contribution to this country by the Windrush Generation.”

The unveiling also shone a much-needed spotlight on the ongoing injustice facing many people in the wake of the Windrush Scandal. Prince William focused on it in his speech, along with his recent visit to the Caribbean. Other Caribbean islanders are keen to follow in Barbados’ footsteps and become republics.

“Our trip was an opportunity to reflect, and we learnt so much. Not just about the different issues that matter most to the people of the region, but also how the past weighs heavily on the present.

“Sadly, that is also the case for members of the Windrush Generation who were victims of racism when they arrived here, and discrimination remains an all too familiar experience for black men and women in Britain in 2022. Only a matter of years ago, tens of thousands of that Generation were profoundly wronged by the Windrush Scandal. That rightly reverberates throughout the Caribbean community here in the UK as well as many in the Caribbean nations.

“Therefore, alongside celebrating the diverse fabric of our families, our communities and our society as a whole – something the Windrush Generation has contributed so much to – it is also important to acknowledge the ways in which the future they sought and deserved has yet to come to pass.”

The National Windrush Monument is a beautiful statue, but it will remain only that until real change is unveiled – not only to put right the injustices of the Windrush Scandal, but to tackle the racism and discrimination that the Windrush Generation and their descendants still face today.

Our theme for Black History Month 2022 is Time for Change: Action Not Words.

To get to a better tomorrow, we can’t just focus on the past. The past is in the…