I grew up in Britain, but I have always been very much connected to my Lozi (western Zambia) heritage. I have proudly told of my heritage and celebrated many Lozi traditions here in the UK. I have long been impassioned to learn about Black History and chose to do my GCSE history project on the slave trade and its impact on Modern Britain, not stopping there I championed the celebration of black history in every educational institution I have studied in, organising the first ever black history month celebration in my sixth form college. I was that girl! But I am no longer celebrating black history month and this is why.

Unfortunately, Britain has long exhibited a history of pacifying disgruntled and frankly mistreated persons or nations. Typically, pacifying them with worthless treaties or wishy-washy legislation, that appear to ‘give in’ to the results or reparations demanded of by the hard done by persons and or nation. I believe that to some extent black history month is a pacifier. My argument for this is, simple. If there were a real desire to have inclusive history in schools there would be, if there was a desire to have equality for all in society and in economic participation there too would be. As it stands there is at best minimal effects in the areas mentioned.

There are three major reasons why, I will not be celebrating black history month.

Firstly, because imperialist history is still at the forefront in education.

The best atonement by the British might be, “ …to start teaching unromanticised colonial history in British schools. The British public is so woefully ignorant of the realities of the British empire, and what it meant to its subject peoples” (Words of Jeremy Corbyn citied in Inglorious Empire – Shashi Tharoor)

With regard to true historical education in Britain, many have argued for the teaching of a multidimensional or rather a “unromanticised” colonial history;

‘If British schoolchildren can learn how those dreams of the English turned out to be nightmares for their subject peoples, true atonement – of the purely moral kind, involving a serious consideration of historical responsibility rather than mere admission of guilt might be achieved’ (Ian Buruma – Dutch writer)

It is of huge importance for true history to be taught especially in the systems (schools) that raise our next generation of leaders. Because as, Labour MP Dawn Butler recently stated, “At the moment history is taught to make one group of people feel inferior and another group of people feel superior, and this has to stop,”. Understanding holistically the implications and impact attached to the glorified colonial British history teaching, is paramount.

I would argue, that rather than have 1 out of 12 months of black history to instead decolonized the history curriculum in schools, which could achieve far greater a feat for black equality and celebration than the 31 days of October.

The second reason for my lack of black history month celebration is due to the disproportionate underrepresentation of black people in economic participation.

This year, the events of BLM (black lives matter) protests have highlighted racial distinctions in many areas of society. And for the first time there has been a demand for company statistics for black employees, through campaigns such as; pull up for change, which simply asks companies to show exactly what their internal staff operations look like, including the senior level, decision making areas – which have historically not included black people. As company after company under civil duress have offered up their statistics, it has shown that history is in fact repeating itself and that black people are in fact underrepresented and that the higher up you go in the organisation, sadly the fewer if any black people you will find. 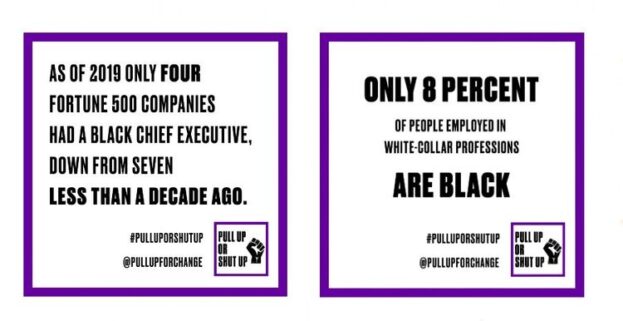 These statistics are concerning, because what they present is that despite the apparent emancipation of black lives, there is no real economic inclusion. And without economic inclusion, black people continue to experience limited autonomy, and weakened power and influence on key public and private sector developments.

The easiest way to not hear someone, is not to include them in the conversation.

Without representation and economic leverage black issues will continue to be unheard. And that is exactly what needs to change. It is 2020 and black people still have the highest unemployment rate in the UK, year on year. This registers as lack of value in black lives and contribution, which makes it difficult to digest a month of “celebration”.

Lastly, the continued marginalisation of black people is why I cannot celebrate black history month.

This is evidenced through the over- representation of black people in prisons, black men for instance are 26% more likely to be remanded in custody than their white counterparts.

And between March and May of this year, of the over 20,000 plus stop and search’ in London more than 80% of those, were conducted on black men. While the whole world was trying to get through the Covid-19 pandemic – a virus that black people are four times more likely to die from and what that experience meant for mental and emotional health. Black men had the added pressure of being stopped and searched by the police.

These disproportionate numbers of stops and searches and custodial sentences indicate a need for a systematic overhaul, one in which every race represented has a fair and equal position and value.

To celebrate black history month, indicates there has been a marked changed, in how black people are perceived, treated and valued in society. Which regrettably the statistics do not show. It therefore makes it impossible for me to celebrate black history month as I do not see a marked changed. Sadly, in 2020 there still stands, educational systems that reinforce racial distinctions, economic systems that out rightly marginalised black people and prison systems that perpetuate racial subjugation.

Ester just read your piece. I found it really enlightling. I am currently the Careers officer for Nottinghamshire police. We are celebrating Black history month and even throuh we have put some really positive pieces of information on our website and social media we still get negative comments from the public. This article brings it home how things are going to take a long time to chnage.

Why would you want to change Black History Month to August. Your idea is flawed as all schools, colleges, universities are on holiday so you would exclude the all young people from learning about black history in Schools. Also many employees in public and private sector organisations up and down the country are on holiday, this would also mean that internal staff networks would also be excluded. Not to mention all the local councils and libraries right across the UK.

The early concept of BHM can be traced back to the celebrated historian Carter G. Woodson in 1926…

Black History Month (BHM) is in its 31st year. Is it needed?

In the 1970s, the Black and White Minstrel Show and Love Thy Neighbour were popular Saturday night entertainment….

BLACK HISTORY MONTH – A BEGINNING AND NOT AN END

“…the Negro still is not free. One hundred years later, the life of the Negro is still sadly…