Pan-London voluntary group BTWSC/African Histories Revisited and related associations expect to productively occupy your Mondays in September, by offering a varied menu of accessible history programmes. As it’s via Zoom (https://bit.ly/MondayXtraHisSes2020), the target audience is international, rather than the usual London-focus.

The Sessions are family-friendly, and aim to improve knowledge of African history through an accessible and engaging manner for a deliberately wide audience, that cuts across age; ethnicity; geographical location; knowledge specialism; or industry or fraternity associations. In other words, ALL are welcome!

The format of the Sessions, which take place 6-9pm (UK GMT+), starts with the screening of a specially made or re-configured video that provides some historical context to the topic of discussion. This is followed by a discussion on any aspect of points raised in the video, led by music industry and history consultant Kwaku, with input from special guest(s). A poll will be conducted towards the end, to gauge attendee views on particular aspects of the discussion.

The first Session on Sep. 7 is entitled A HISTORY OF BRITISH BLACK MUSIC THROUGH THE AGES. This takes the audience on a 2,000 year trip through British black music history. Music fans will be expected to fill in some of the gaps.

With this year being the 80th anniversary of the death of pan-Africanist icon Marcus Garvey in London and the 100th anniversary of the first international convention in New York of his organisation UNIA-ACL (Universal Negro Improvement Association-African Communities League), the second Session is very timely. HIGHLIGHTING MARCUS GARVEY, UNIA & GARVEYISM THROUGH FILM, which takes place Sep 14, provides useful backstory to the work of Marcus Garvey & the UNIA-ACL 80:100.

The third Session on Sep 21 is I WAS IN NURSING BEFORE WINDRUSH AND THE NHS. It contrasts the ubiquitous story of the Windrush generation Africans coming to the UK from the Caribbean, by giving space to the story of a nurse from the Gold Coast (present day Ghana), who was working in the health service from 1947, which was before the docking of the Empire Windrush from the Caribbean and the formation of the NHS (National Health Service) in 1948.

The last Session, for now, is on Sep. 28. THE RE:IMI UK MUSIC INDUSTRY AND RACISM FILM REMIX highlights the little known history of the intersection of music and racism (and apartheid) over the decades, and how today’s music industry is dealing with it in a post-George Floyd/#BlackOutTuesday world. Representatives of the music industry respondents to the RE:IMI Black Out Tuesday UK Music Industry Race Diversity Report are expected to talk about some of their programmes dealing with racism. Click here to read Report and here for the Press Release.

These events are open to everyone, including those from non-AAME (African, Asian, Minority Ethnic) backgrounds, who since George Floyd’s death have been firming their allyship by reading African history and biographies, and attending racism training programmes. 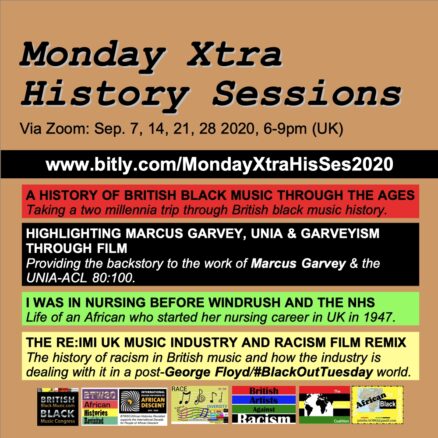 There’s also another opportunity for allies, particularly gate-keepers and those championing race/ethnicity-facing diversity change, to understand the politics of language and its impact on their diversity, anti-racist and decolonising work. Due to popular request, BTWSC/African Histories Revisited is repeating on the Interrogating Language Of Identity And Decolonising event on Wednesday Sep 9.

This Zoom (https://bit.ly/IdentityLanguage2) meeting is the forum for exploring identity language and terminologies within the workplace, academia, heritage, political and anti-racist spaces, from a British African context. 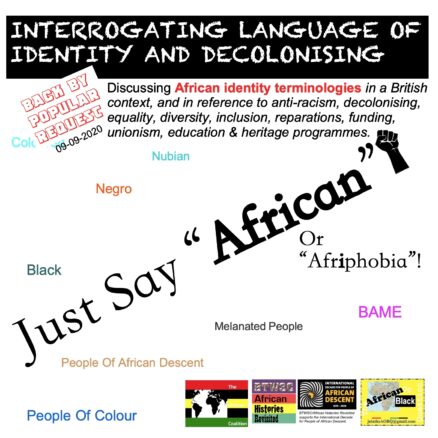 Marcus Garvey: 80 Years On… And The Significance Of August In The Pan-Africanist Calendar

Marcus Garvey: 80 Years On… And The Significance Of August In The Pan-Africanist Calendar Aug. 15 2020 update…

The Politics Of Racism, Terminologies And Imagery

The Politics Of Racism, Terminologies And Imagery Whilst March may be known for International Women’s Day or Month,…