Our late Father, Wilston Samuel Jackson, Bill to his friends, was born in the Jamaican parish of Portland in 1927.

At age 17, his 45 year old father died suddenly, shattering Bill’s dreams of being a dentist. Bill decided to move to England, the Mother Land, where workers were needed to help rebuild after the devastation of the Second World War. Arriving in London in 1952, Bill was shocked to be met with blatant racism, something he had never experienced in Jamaica. Regardless of the hostility, he determined to become a train driver. 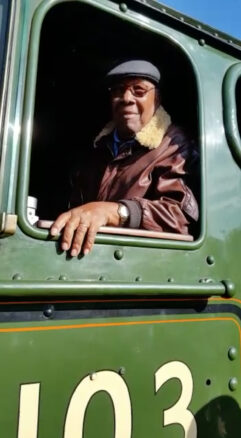 In those days there were no Black train drivers, an unspoken rule that the driver’s job was reserved for whites only. Even fellow Black railway workers believed a Black man could never become a driver, many quitting their rail jobs because of the lack of prospects. Bill remained resolute. For years, never late or missing a day, Bill endured a fireman’s punishing regime, shovelling 10 to 12 tons of coal a day in hot and filthy conditions. He was overjoyed when in 1962 he passed his exams with flying colours to become a fully-fledged locomotive driver and The First Black Train Driver. But his troubles were not over. His white colleagues were astonished and furious that Bill was now a driver and so they organised, forbidding any white man to work with Bill.

On Bill’s first day as a driver, he was congratulated by the white foreman on his achievement and told to prepare an engine to take out. What happened next would have crushed a lesser man, as while Bill was happily preparing the engine his allotted fireman told him he would not work with him. The fireman then repeated his decision to the foreman, who, surprisingly, told the fireman to go home as he no longer had a job. The traumatised fireman returned to where Bill was preparing the engine and asked if he could work with him. Bill replied, ‘I don’t have a problem with you, it is you who have a problem with me.  If you do your job well, we’ll get along fine’. Years later, Bill saved another fireman’s life.

In 1966 Bill immigrated to Zambia, formerly Southern Rhodesia, where he continued to drive trains throughout that vast country, later becoming a farmer and helping his neighbours by arranging the erection of an iron bridge over a river.

In acknowledgement of Bill’s achievement, a commentative blue plaque was exhibited in the offices at Kings Cross train station the year before his death. Sadly through illness he never got to see it. We will now be pressing for a National Heritage Blue Plaque as these are only eligible for the deceased.

WILSTON SAMUEL JACKSON – FIREMAN AND DRIVER OF THE MALLARD, ELIZABETHAN, AND FLYING SCOTSMAN AND THE FIRST BLACK TRAIN DRIVER IN GREAT BRITAIN.

Proud to have met him and to be at his 90th birthday party.

The genes live on x

This is so encouraging. May his soul continue to rest in eternal peace.

This is so encouraging.

What a great man

The article was very informative . The challenge was faced with determination and honor. I admire Mr. Jackson in his journey. Thank You for sharing. Ms. Rollizo

Weren’t Authentic Railroaders
Called Engineers & or Conductors ?
My Late GrandFather was a Coal miner, all of his very young life until he was old enough to be a Pennsylvania Railroader Engineer &
On Easter 1962 He Was A Very Dearly Loved Conductor on the Strasbourg Railroad Coatesville Pennsylvania He picked My Late Little Sister & I up & truly surprised us being Our Conductor May My Late Grand Father Kenneth Winfield Thomas
Pennsylvania,Reading,& Strasbourg Railroad Engineer & Easter Conductor
Rest In Eternal Peace
December 16 1902 May 5 1975

it’s great these stories are being told publicly and to be told for generations to come:))

His family should be proud of his perseverance! May he continue to rest peacefully

I think my he was related to me was his nephew called Tommy/ William/Walessly. Did he have a sister who had a two sons?.

A remarkable tale of resilience and self-belief. This is the kind of history that people should know about, illustrating the indignities which many Afro-Caribbean people had to go through (and still have to go through).

He had the guts to persevere and thank God he lived to receive the Glory. A blessing to all of us who get to read about his accomplishments. After everything he had already done he moved back to the Motherland.

I am an artist. Doing the inside of a train car, I wanted to do a black history moment. I came across this story about Wilston Samuel Jackson, so I added it to my piece.

The position of fireman was a back breaking job, they had to arrive first to build the fire and were the last to leave as the coals had to be dumped from the boiler ! In America the blacks he’d no hotels to take them so many slept in the passenger cars or even upon the engine on 2 by 12s from window to window ! And railroad workers worked 16 hours a day then , now it is a maximum of 12 hours

Black Power, A Forgotten Ally and the Olympic Games

Dame Jocelyn Barrow: More Needs To Be Done On Her Lifetime Work On Racial And Multi-Cultural Awareness

“I also believe that it’s part of our own responsibility as communities, as parents, as elders in our…

WALTER TULL has become the most celebrated black British soldier of the First World War. He enlisted in…