When Emmanuel Kulu began work on his mythological novels, he did not know he would become the subject of death threats. But buoyed by the best-selling status of I, Black Pharaoh: Rise to Power, the African-American novelist has looked at the cinematic potentials of his novel.

Set around the Egyptian dynasty of black Pharaohs, Kulu’s novel counter a pervasive and Eurocentric view of Egyptian Pharaohs. Enter Emmanuel Kulu’s world of Kemet (ancient Egypt) and black Egyptian kings and queens. The Buffalo, New York based author, is at work on the movie adaptation of his blockbuster book. Nicole Lopez, agent at Penguin Random house, tells me: “We will begin pitching this summer.” 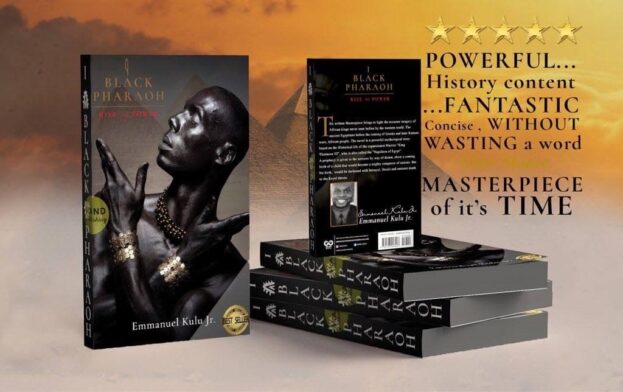 Emmanuel Kulu believes Africans must strive to tell their own narratives. In his own words: “You have to define Africa through Africans.” In a public outing at US People Podcast with Savia Rocks, which is available at https://music.amazon.co.uk/podcasts/bd040431-eee8-468d-91c3, the former CEO of Tephlon Entertainment reveals that he began receiving death threats after he chose the cover of his novel and shared it across social media platforms. He used a “Sudanese brother” for the book’s cover. His detractors accused him of trying to steal their story, he says. But he said that wasn’t the case. “I wanted to show us in our glory,” he insists.

Kulu draws constant inspiration from his father, who once told him, “wisdom is knowledge plus experience.” This African historian writes books about Black Pharaohs and Africa’s golden age of conquest in ancient Egypt. Emmanuel Kulu Jr., former social worker, hopes to bring to the big screen the great expansionist of ancient Egypt, Thutmose 111 and Queen Hatshepsut, who ruled ancient Egypt for two decades. He says Thutmose 111 is the North African equivalent of Chaka Zulu of South Africa. Ms. Lopez reveals the author is assiduously working on the movie adaptation of his book. She tells me: “He is really working hard on that as we speak. He wants to show Africa at its height.”

“You have heard about the wars, poverty, and civil unrest currently plaguing the African continent, but was this always the case in Africa?” Kulu asks. To further shed light on issues around his novels, Emmanuel Kulu has scheduled an educational seminar: “Untold: The Golden Age of Africa,” at Buffalo & Erie County Historical Society. Billed for 27 January, the talk-shop has since garnered over six hundred global attendees.

He will stream this event worldwide via a zoom link. Readers can learn more at www.iblackpharaoh.com, and at https://us02web.zoom.us/j/9723340859?pwd=YTlXYjExZC81RVRlQzQzZVdRdlo2dz09.

100 years of Service and Sacrifice

As we mark 100 years of the coming together of some of Britain’s oldest Remembrance traditions, the Royal…

Evadne Gordon from Hackney, London, was just 19 years old when she joined the Royal Naval Reserve as…