Most of the people who appear before the Board have committed a serious sexual or violent offence. We make decisions in around 25,000 cases each year, once the individual has served the punishment determined by the courts.

These are crucial decisions; ensuring that people are only kept in custody where they remain a significant risk to the public; whilst ensuring communities are protected from serious harm. In my experience most people accept that after being properly punished, people deserve a second chance, if their risk to the public has reduced. These are judicial decisions, and every case is different and must be considered fairly on its individual merits and must be based on evidence.

Given the Parole Board makes such significant decisions, it is vital that we have the trust and confidence as well as looking to reflect those we see (including victims who attend hearings), and the communities we serve. 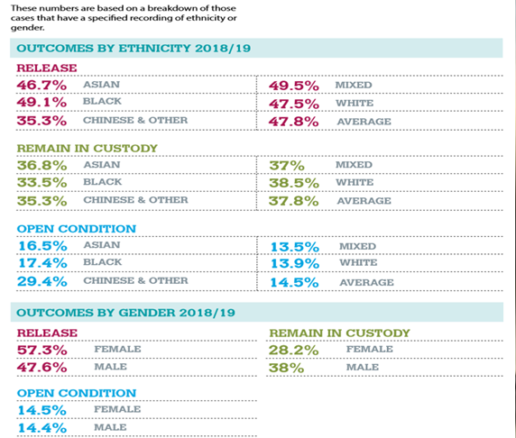 The Lammy report brought into sharp relief ongoing concerns I have had about the lack of representation amongst the members of the Parole Board. In 2016 as CEO of the Parole Board I was interviewed on National Prison Radio by a group of prisoners, and a young black prisoner commented that he had never seen a non-white Parole Board member. I found that unsurprising since less than 5% of over 200 Parole Board members report as being from a BAME background. By contrast over a quarter of those in prison are from those backgrounds.

As a minimum such a mis-match has potential to cause a loss of trust, but it also carries a risk, of unconscious bias in decisions. So, whilst wanting to make a difference is all very well and good, to improve the results the Board sought to completely overhaul its recruitment processes.

In the past the Board had run huge national campaigns (prompting over a thousand applications); the sheer volume of applications has meant that we have used on-line sifting tools; people interested in working for the Board needed to visit the Cabinet Office public appointment webpages. The Board felt that this approach was failing to reach out to people in the BAME community.

We also wanted to reach out to people who might never have thought about working with the Parole Board. To achieve this when we launched our campaign in the North of England, we hosted two outreach events in Bradford and Sheffield, which were attended by well over 200 people who had the chance to talk to me and Parole Board members. We also gave targeted media interviews.

Our approach worked and significantly more people from a BAME background applied and many were successful.

In August, the Parole Board announced that we had appointed an additional 53 new, and independent members. 48% of the people appointed were from a BAME background and a significant proportion of those were from a Black African/Caribbean background. In one recruitment campaign the Board more than tripled the number of BAME Parole Board members and increased our overall percentage of BAME members from under 5% to 13%. I have now met many of those people and I am sure they will enrich our work.

There is still work to be done, and we are committed to building on this success across the country, and planning is already underway for our next campaigns in the Midlands and London and the South East. The new approach needs to be mainstreamed into every future campaign.

Whilst I am glad that we have made a good start in increasing our diversity. We need to monitor potential disproportionality as seen elsewhere in the Criminal Justice System (in arrest and sentencing). This is now a focus of training and awareness for Parole Board members.

The Parole Board looks forward to encouraging and attracting the best people from all the diverse communities to help us with the important work we do serving society.

I wish all the readers and supporters of this years Black History Month magazine a happy and joyous season celebrating the numerous events around the country. It is important that we all recognise the significant contributions our vibrant multi-cultural communities have made to the success of the UK.

Martin Jones
Chief Executive of the Parole Board
www.gov.uk/government/organisations/parole-board

If you want to do something worthwhile, like give something back to your community, then a career in…

Who is included? A black woman’s account of prison employment

When you think about prison staff what image comes to mind? I ask this question because many people…

Clifford Chance offers you the opportunity to join a global law firm with one of the most pre-eminent legal practices in the world.

As a leading law firm, we recruit the best talent from around the world. It is essential to…

Getting in and getting on in law

A career in law can sound quite glamorous, can’t it? Striding around the courtroom, putting bad guys in…