Can you tell us about your early life growing up in Manchester and what or who first got you into classical music?

I was born and brought up in the inner city suburb of Cheetham Hill in Manchester. It’s a wonderfully diverse community where nearly 90 different languages are spoken within a 2 mile radius! I was first introduced to classical music through my involvement with choral singing. Aged 8, I became a chorister at St Ann’s Church in Manchester city centre. I went from not being able to read a note of music to becoming Head Chorister. This was all thanks to the legendary choir master and organist Ronald Frost, who taught me everything I needed to know. Through the choir, I was introduced to a wide range of musical styles and repertoire and my love for classical music grew. As a teenager, I also sang with the National Youth Choir of Great Britain and Millennium Youth Choir, before spending my year out after school as a Choral Scholar at Truro Cathedral in Cornwall. 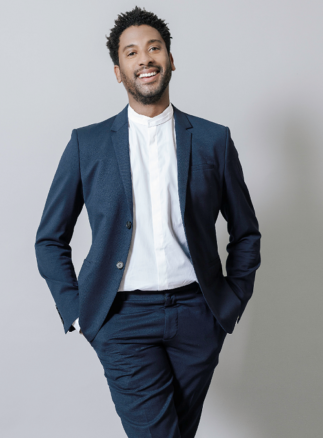 Who was your first teacher? Other teachers?

As well as Ronald Frost, there’s now a long list of people who have nurtured me over the years. As a student at the Royal College of Music, I studied singing with baritone Russell Smythe. I’d say this was the period where I realised opera could be a viable career choice for me.

Is your family musical?

My family aren’t professional musicians but I grew up in a house filled with music. My mum has an extensive vinyl collection – everything from Rod Stewart to Percy Sledge. Apparently I was a huge Chaka Khan fan as a toddler and would dance up a storm whenever her songs were played. I have three sisters and they all love to sing, so we’d often sing along to records or music videos together. Family gatherings often involve lots of singing and dancing! I recently found that my Bajan grandfather used to play the double bass.

Which musicians do you admire?

Who has most inspired you in your career to date?

What would you say has been the best performance of your career so far?

Well I think you’d have to ask the audience about that! A show I really enjoyed performing in was Effigies of Wickedness – a co-production with the Gate Theatre and English National Opera.  It was developed from a recital programme I created in to an all singing, all dancing show. It was made up of previously banned or suppressed songs by predominantly Jewish composers. It was a huge honour to be able to share this music and make friends for life whilst doing so.

Do you get nervous before a performance?

I do. I like it that way though as I find it can be a useful energy to feed into my work.

What do you think you would be doing right now, if it wasn’t for your music career?

I studied art and philosophy before going to music college, so perhaps I’d be painting or working in a gallery.

What do you think the arts sector needs to do to become more diverse?

Less talk and more action. We need to get on with employing people of all backgrounds – in all areas.

What is the best advice you’ve been given?

Find space in your creative output that allows you to work out what you have to say as an artist.

What is one message you would give to young people looking for a career in the arts?

Work out what you want to contribute to the world as an artist.

What is your favourite song to perform?

The Solidarity Song by Hanns Eisler.

Do you sing in the shower? What songs?

I don’t usually as I’m pretty quiet in the morning!

After the Corona lockdown. What’s next for you?

All being well I’m going to be singing the role of Joey in Kris Defoort’s new opera “The Time of Our Singing” at La Monnaie in Brussels.

An interview with Esi Edugyan on her book “Washington Black”

Esi Edugyan’s Washington Black  won the 2018 Scotiabank Giller Prize, and was shortlisted for the Booker Prize and the…

Steven is currently serving with Royal Logistic Corps as the Unit Welfare Officer based in Oxfordshire. He joined…

Akala starts the conversation discussing the difference between racism in America versus there in the UK . Then…

After yet another unprecedented night [and early morning] of political swings and roundabouts, I find myself at the…