I first read about John Myers about five years ago and have always been interested in him. He died tragically young and he lies thousands of miles from home. The least he deserves is a decent memorial to his life.

The grave itself, A578, can hardly be noticed. It lies in the old part of Milford Haven cemetery in Pembrokeshire, south-west Wales not far from the chapel and old caretaker’s house. It is a grassy depression lying between a leaning cross on the adjacent grave on one side and a raised grave mound on the other. There is no marker of any kind to denote that it is the last resting place of a young Nigerian coal trimmer, named John Myers (sometimes spelt at Meyer). He worked on arduous coal handling tasks, helping to load coal into a ship’s hold and delivering the fuel to the stoker or firemen. Little is known of his early life save that he was born in Nigeria in around 1893 and was employed on the Elder Dempster Lines. This was a Liverpool-based shipping company which traded to West Africa. The company had a long history of employing west Africans on their ships where they were usually employed as trimmers or firemen in the boiler room, often the most dangerous part of the ship. They were usually paid twenty percent less than their white colleagues for doing the same work.

The first ship which John Myers sailed on appears to have been the RMS Cedric. This would probably have been the 21,000-ton White Star Line ocean liner which was launched in 1902. John’s next ship was the SS Falaba. This was a passenger and cargo ship of 4,806 tons, built in 1906 at Glasgow for the Elder Dempster Shipping Line Ltd. of Liverpool. When the Falaba set sail on 27 March 1915 there were eighteen black crew members on board compared to twenty-three who were part of the ship’s complement on the preceding voyage. She carried a crew of 95 and 147 passengers plus a cargo estimated at £50,000 which included 13 tons of cartridges and gunpowder. 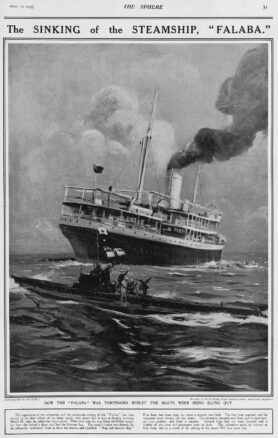 At 11.40 on the morning of the 28th March 1915 as she was steaming 38 miles west of the Smalls lighthouse off the Pembrokeshire coast a submarine was sighted. The German admiralty had declared the waters around the British Isles a war zone on 4 February 1915 (in response to the Royal Navy’s blockade of Germany) and their fleet of U-boats began to sink the ships of their enemies and neutrals alike. The submarine was the U-28 commanded by Freiherr Georg-Gunther von Forstner (1882-1940). He had sunk the passenger ship Aguila the previous day with the loss of eight lives. Captain Davis of the Falaba tried to outrun the submarine but he soon realised he could not outpace her. Two distress wireless messages were sent and the Falaba stopped engines. Forstner ordered Captain Davis to abandon the ship since he intended to sink her. A chaotic and disorganised evacuation followed as the submarine had allowed only around five minutes before the torpedo would be fired. This duly occurred while a considerable number of passengers and crew were still on board. Only four lifeboats had been successfully launched before the torpedo struck. The Falaba sank bow first in only eight minutes and 104 people, 53 of them crew members, died either in the explosion or to the effects of the freezing cold waters. The crew of the U-boat were accused of laughing and mocking the efforts of those in the water as they struggled to survive.

One of the victims was Leon C. Thrasher, a 31-year old mining engineer from Massachusetts, the first United States citizen to be killed in this first period of unrestricted U-boat warfare. The trawler Eileen Emma saved 116 people from the Falaba including 40 from the water. Sadly, six of these died shortly afterwards. John Myers was almost certainly one of these victims. The drifter Wenlock rescued another eight survivors of whom two died later. The survivors and victims were taken into Milford Haven. Interestingly a soldier of the Brecknockshire Territorial Reserve battalion stationed in the town remarked upon the pitiful sight of the black men and women who had survived the sinking. John Thomas, another Nigerian and chief fireman on the Falaba identified the body of John Myers. It was indeed cruel irony that Thomas was himself destined to die in the sinking of his ship, the Apapa off the coast of Anglesey on 28 November 1917.

Impressive funeral services were held at Milford Haven as the bodies of the victims, including Captain Davis, were repatriated from the railway station to their respective families across the country. The only one who was interred locally was John Myers who was described as being of the parish of Stepney.  He was buried at Milford Haven cemetery on 1 April 1915 in a ceremony conducted by the Rev F. T. Oswell. For 105 years John Myers has lain in an unmarked grave. A local memorial to this young man is long overdue. His name does appear on the Tower Hill memorial in London which lists the names of those in the merchant marine and fishing fleets who died in both world wars. He was a victim of a submarine outrage which shocked the whole country at a time when such occurrences were new in warfare. A Just Giving page, ‘Let’s Give Him a Memorial’ has recently been established to provide a memorial headstone and the due recognition which he richly deserves.

Hi Simon, if you can supply CWGC with enough information that they accept – they will provide a headstone. I have located his Tower Hill Memorial on their website, so the death is accepted as war-related (they must not have known about his burial at the time). They will need proof that this is in fact his resting place and then approve a headstone.
https://www.cwgc.org/find-records/find-war-dead/casualty-details/2972573/JOHN%20MYERS/

For anyone else interested in the stories of Black servicemen during WW1 please take a look at this collation created during the 100 year commemoration 2014-2018 by the Imperial War Museum. I worked as a volunteer to bring as many stories to the forefront as I could, and now they are part of a permanent digital archive. I hope that more stories like John’s can reach public awareness. Lest We Forget.

Why Black History Month is more important than ever this year?