It must have been in the summer of 2001 when I became aware of the BBC 100 Greatest Britons campaign; I remember seeing a massive billboard one weekend as I was driving from London to Wolverhampton to visit my parents. The poster hoarding was encouraging people to nominate their Greatest Briton of all time, and I saw similar messages as I clicked on the BBC website in the following weeks. 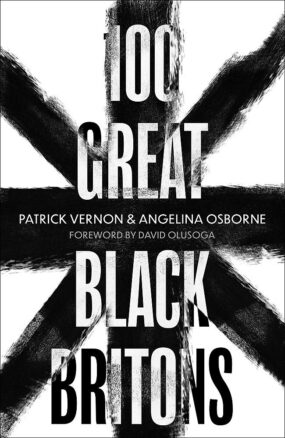 My feeling at the time about the BBC’s venture was that it was simply another vanity project to bolster their ratings, as they were facing competition from other terrestrial, satellite and emerging cable channels. However, it was not until the autumn of 2002 that my attention was drawn again to the BBC campaign. Their official list of 100 Greatest Britons was announced along with a ten-part documentary series, which then culminated in a final voting extravaganza and studio debate. Looking through the list, I noticed that the only person of colour was the late Freddie Mercury, lead singer of Queen, born in Zanzibar of Parsi heritage. I remember reading various articles and commentaries regarding the lack of representation of women and different parts of Britain on the list. I was a member and committee member of BASA (the Black and Asian studies association), which, along with other organisations, had been lobbying the government and education bodies for several years to ensure that the national curriculum reflected the diversity of history – with some success. BASA’s membership of academics, community historians, students, activists, and writers all complained and castigated the BBC about its lack of Black and Asian representation in their Greatest Britons poll, which we felt was another instance of institutional racism and reinforced the invisibility of Black and Asian British history.

Many believed that the BBC had a golden opportunity, as a public broadcaster, to rectify this invisibility. However, when Winston Churchill was announced the eventual winner of the Greatest Briton poll during Black History Month 2002, numerous people felt this was game over again. Nevertheless, I became fixated by this overall creative process of engaging the public – how to use online content and films, involving celebrities and people in public life, to create a narrative of British history. I decided an intervention was required. I was going to create my alternative campaign focusing on people of African descent, showing their contribution to the creating and shaping of Britain going back 1,000 years. However, I had no idea how I was going to do this – how I was going to compile a comprehensive list of individuals and develop a public media campaign. I sent a message to the BASA group that we should all do this together and develop our alternative list of Black British achievers. Only one person responded, however, who wished me well in my venture. Undeterred, I started to plan how I could deliver this project – what resources I would need, as well as the timescale. I concluded that this campaign had to be ready by the first anniversary of the BBC announcing the results of its 100 Greatest Britons, which was also during Black History Month I approached Angelina Osborne and offered her a six-month job as a researcher for the campaign. In the end, though, we became lifelong friends, and she is now co-author of this publication, doing the bulk of the research and writing. To put together the list of individuals, I then approached friend, entrepreneur, board game publisher and walking encyclopaedia on Black history, Jak Beula Dodd. He provided a working list of names to lay the foundations for the website and further research.

Angelina and I set to work, reaching out to various people for further information and advice. During this time, I also referred considerably to the historical genius and all-time hero of mine, the late J.A. Rogers (1880–1966). Rogers wrote several books covering the Black presence in Europe, and his two-volume opus World’s Great Men of Color (he did cover women too, though!) was written during the time of the Second World War and was based on his extensive travels in Europe. It was also a rich source of material for the Black Britons project as it was one of the few books covering the Black historical presence in the UK. Other books of great interest and inspiration were Black Britannia by Edward Scobie (I was tempted to use this name for the campaign) and Staying Power by Peter Fryer. Rogers’s book 100 Amazing Facts About the Negro became the template for how we designed the website and how we ran the campaign, seeking to educate people that Black British history is also part of British history. Our aim was to highlight Black individuals who had occupied the same space as white British heroes but who had either been ignored or whose identities were never mentioned or discussed. We also sought to bring to the foreground those who were the first Black people to take on a specific role or appointment that broke the mould and paved the way for others. In addition, we wanted to cover multiple time periods over the last 1,000 years. In the end, by the time we finished the campaign in February 2004, the number of biographies on the website was more than five hundred names under many subcategories – five times the hundred we set out to achieve. One of the key aspects of the campaign was to inform and engage young people and schools, so we decided to run a school competition for key stages 1 to 4, with students submitting their celebrations of Black British history. Th is ranged from paintings to videos of school assemblies to booklets showcasing their favourite Great Black Britons. My good friend and teacher Angie Brooks helped to formulate questions for students on the website, and I then approached the Times Educational Supplement who reviewed the site and helped to promote the school competition. For the 2020 campaign, we ran another school competition with the support of the National Education Union.

Millennium blues and retromania The BBC’s 100 Greatest Britons campaign took place at a time when Britain was experiencing a wave of nostalgia and retromania after the anti-climax of reaching the new millennium. Britpop and Cool Britannia of the 1990s had disappeared as Britain saw the emergence of garage and grime in the early 2000s. British sporting achievements were few, and there was a growing movement towards independence for Scotland and Wales, plus mounting demands from northern cities for more regional autonomy, which were all threatening to fracture the Union and the whole notion of Britishness.

Sixteen years after 100 Great Black Britons began, in 2019 we relaunched the campaign against the backdrop of Brexit, the rise of right-wing politics, the 2018 Windrush Scandal and the continuing inequality facing Black people in the UK. As we were working on the book, COVID-19 was also having a disproportionately devastating impact on the Black community, and I was campaigning for Mary Seacole to be named as the NHS COVID-19 recovery hospital in Birmingham. The year 2020 also saw the resurgence of the Black Lives Matter movement because of George Floyd’s murder at the hands of the police in the United States. More white people, it seems, are starting to understand that every day and structural racism is not a figment of Black people’s imagination, with marches, demonstrations and vigils taking place in defiance of the government lockdown due to COVID-19. Th e debates around white privilege, how to be an ally to Black and Brown people, and mainstream bodies issuing statements of solidarity to the Black Lives Matter cause are all welcomed.

For many years race was off the agenda, despite the atrocities of Grenfell Tower and the Windrush Scandal, and it remains to be seen whether this discourse on race relations in Britain carries on. However, I believe that the removal of the Edward Colston statue in Bristol in June 2020 was an iconic moment reminiscent of the fall of the Berlin Wall in 1989. It has served to kickstart a nationwide conversation about Britain’s colonial past, especially when it comes to the national curriculum, the role of statues and revisiting national heroes like Winston Churchill. Since the first 100 Great Black Britons campaign in 2004, academics and independent scholars have discovered more Black British historical figures, and new role models and icons have emerged. Like the Black Lives Matter movement, this fresh iteration of the 100 Great Black Britons campaign provides an opportunity for reassessment and reflection. What makes a Great Black Briton? How do we recognise unsung heroes who may not have had the same profile and coverage about their impact and legacy? I believe that the latest campaign and publication have the potential to further educate, inform and advance the contributions of Black people in Britain, and inspire the next generation of role models and achievers. I hope that it will be a further marker that Black people belong here, that our historical and current contributions are making a difference, despite us not always having been valued and respected.

Patrick Vernon is a social commentator, campaigner and cultural historian and Honorary Professor for cultural heritage and community leadership at Wolverhampton University. He co-authored 100 Great Black Britons with Dr Angelina Osborne. The collection highlights the history of black achievement. It contains the biographies of individuals dealing with the adversities such as structural racism and the British empire.

100 Great Black Britons will be in paper from September 2021. The book will be for sale in USA and Canada from October.

We have come a long way as a society from ‘Negro History Week’, established by Carter G. Woodson…

100 years of Service and Sacrifice

As we mark 100 years of the coming together of some of Britain’s oldest Remembrance traditions, the Royal…

Although little is known about Blake himself, he would be one of thousands of black seamen from all…

Dickie Barr was born in Perranuthnoe. He was the son of a miner, Richard Barr, who was of…