Johnnie Fiori has performed in everything from the Telly Tubbies to Hairspray, then acting with Danny Devito, to being directed by Woody Harrelson, there is not much that this talented American performer has not tackled in her career…and it seems there is a lot more to come.

What brought you to London? 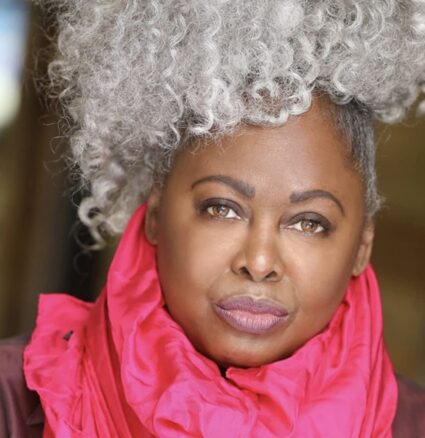 When I moved to London, I had a one-way ticket. I knew I could sing and having previously done voice over work in Los Angeles all I needed to do was get an agent and a gig.

I sent out 25 samples of my voice, I received 24 rejections, the 25th which was Speak Easy said yes!

I was with Speak Easy for a couple of years, I will always be indebted to that agency…. when a voice over actress whom I greatly admired told me about a brilliant agent that was leaving a world-renowned agency and starting a new one called Just Voices, she urged me to check them out.

Well, I was lucky enough to speak to Leigh Matty herself. She asked me to send her a voice sample, which I didn’t have, so I changed my outgoing message on my phone and asked her to ring me.

She immediately put me in touch with a company that sorted me out a voice reel. Leigh continues to represent today me along with all the amazing staff at Just Voices. Side note Leigh represented me without meeting me. I eventually did meet her…. 5 years later!

How did I get into the acting business?

Completely and utterly by accident. Two friends were in a play at

My friends thought it would be a great idea if all the witches were American and pushed me to audition, and I got the role as “Evilene”.

Let me state for the record…I never wanted to act. I had recently moved from Los Angeles to London, to get more of a British sound to my electro acoustic blues.

Acting was nowhere on my radar, as I was a singer songwriter!

I had made a wonderful new friend, who decided to come along and support me in the show. Afterwards she suggested that maybe, just maybe I give acting a go.

I laughed in her face…. rude!

But she persisted…. she saw something in me that I didn’t see in myself. That amazing human is Jacquie Drewe, even before she started the acting and presenter’s department at Curtis Brown.

So, from there you have not stopped?

I have to laugh out loud because for the last twenty years I’ve been an actor doing stage, TV, and filming, along with voice over work.

Everything from Chuggington, Tinga Tinga Tales, Telly Tubbies and the Three Muses for The Disney soundtrack of Hercules.

At the time I was living in Wales and flying all over the world doing House music.

Jacquie called me one day to tell me I had an audition…. I said for what?

She replied…. You need a job?

I auditioned and got my first West End show 125th Street, which was the musical story of the night the Apollo theatre in New York.

The story was that they had closed with a theatre full of people while a riot was ensuing outside.  However, the show had to go on, so it came down to the stagehands to step up and perform.

It was my first musical and it was also Pete Dalton’s first show…he’s better known today as MistaJam. That same cast also included the multi-talented Giles Terera, who recently won the Oliver for his role in Hamilton. Do pick up his book Hamilton and Me for inspiration.

So, your career has now gone from strength to strength. Tell us about some of your roles?

Well, I originated the role of Motormouth Maybelle in Hairspray, directed by Jack O’Brien at The Shaftesbury Theatre.

Then I played the Iconic Ma Rainey at The Royal Exchange in Manchester, directed by Jake Murray.

This was followed by Vernon God Little at the Young Vic, under the direction of Rufus Norris, and The Sunshine Boys directed by Thea Sharrock, starring Danny Devito and Richard Griffiths, at The Savoy.

I also repeated my role with Danny in The Sunshine Boys in Los Angeles at The Ahmanson Theatre.

I had left Los Angeles as a singer songwriter and now returned an actor!

I will forever be indebted to the fabulous casting director, the late Maggie Lunn. who saw that not only could I do comedy and sing, but I could also do drama?

I have been very fortunate that people continue to see something in me and continue to help me develop my acting chops. Great directors, exceptional cast mates and of course my agent Jacquie Drewe.

What medium do I enjoy best…live theatre, or TV?

I enjoy them all, however they all require a different type of discipline.

Theatre is all encompassing…8 shows a week…Live! in that moment it’s electric, sensational, anything can happen. I love being consistent with my character, but never becoming relaxed. I also love ensemble pieces! Everybody riffing off each other, the timing, the joy.

Film…is such a joy no less demanding…. I enjoy filming because the character comes to life as soon as the director calls action. Film, like telly to me, allows several takes to get it just right, whereas theatre is loud, exciting, emotional, alive!

Telly and film are more intimate. The performance comes through the emotion and the eyes…. Is it believable? Is it real? That’s the gig to make it believable and entertaining.

I know that I’m very lucky. But I also, put in the work…It’s about balance.

I didn’t go to theatre school, but I’ve always believed that school teaches you how to count your money, not necessarily, make your money.

I’m just blessed to continue to work in a creative environment.

Singing I Know Where I’ve Been, from Hairspray, the night Barack Obama became the 44th president of the United States….it was magical, I don’t know when it started or when it ended…. I just remember the pride and the tears.

The first African American president. Even to this day when I sing that song it gives me such pride and remembrance how far we have come as a people.

Reading lines with Danny Devito! Being in a scene with Danny, just him and I… magic, just magic. We ran our lines every day for our scene…I loved doing that!

Woody Harrelson offering a role in his directorial debut film, Lost in London…I read with him once, he said it’s a small part, but if you want it, it’s yours…Thank you Woody and thank you to my brother from another Mother Sean Power, for telling Woody, Man you need to see my friend for this.

Do you think the move towards diversity over the past few years in the industry has made a difference especially for you as a person of African heritage?

As a Black American Woman, in this medium it feels like things are opening up, getting better, but I feel our collective opportunities to be seen or heard should be predicated by us.

Telling our stories our way.

We need to show up….and show out.

It’s no longer a closed set…. trust me, we will shine the light in all places in which we feel we are not represented properly.

By the way, just worked on a short film Chairs, directed by James Hughes, with a brilliant Black stylist, Mekel Bailey.

What projects are you currently working on now?

The musical Vanara: The Legend. The Musical at The Hackney Empire. It’s a world premiere in a limited run will be October 22nd-October 31st.

October 3 fundraiser at The Ministry of Sound for Bobby Laviniere of The Soulful House DJ duo Bobby & Steve. Dance for Stevie is raising funds for Stevie, who has been paralysed from long Covid.

Last but not least creating my own content. We are currently shopping a telly idea about King Arthur and me. My love of The Arthurian legend from a chocolate standpoint…stay tuned.

Finally, what advice can you offer to young Black people considering working in showbusiness?

Always show up early and be prepared.

Don’t let anyone stop you from your dream always bring the fire and professional behaviour to each and every audition.

You are unique believe it. It doesn’t matter what others think of you, it’s what you think of yourself.

Love this interview. Such a fan of Johnnies! A living legend!!

Johnnie Fiori was born with stage presence and amazing lungs – I first saw her sing at The Palomino in North Hollywood with TRS in the 1980s. Huey Lewis had borrowed the Tower Of Power horn section – for 2yrs – and the Tower Rhythm Section (aka TRS) needed a singer. She was amazing. It’s crazy that the UK had more to offer – professionally speaking – than America, for someone who’s name should be mentioned in the same sentence as Aretha, Tina and Chaka. She’s that good! Wishing Johnnie continued success!

Johnnie is an amazingly talented woman. I first met her when she sang to me at The House of Blues in Los Angeles many years ago. I knew immediately she would become a star as she was so talented. I’m honoured to have seen her sing and act and I urge anyone who hasn’t seen her beat a path to her next gig to be amazed.

The National Caribbean Heritage Museum and Bishop Grosseteste University, in celebration of the continued achievements and contributions of…

An interview with Emmanuel Bajiiji