Members of the Windrush generation and their families joined HRH Duke and Duchess of Cambridge at London Waterloo Station today to witness the unveiling of the National Windrush Monument.

Designed by renowned Jamaican artist Basil Watson and delivered with £1 million funding from the Department for Levelling Up, Housing and Communities, the Monument symbolises the courage, commitment and resilience of the thousands of men, women and children who travelled to the UK to start new lives from 1948 to 1971. 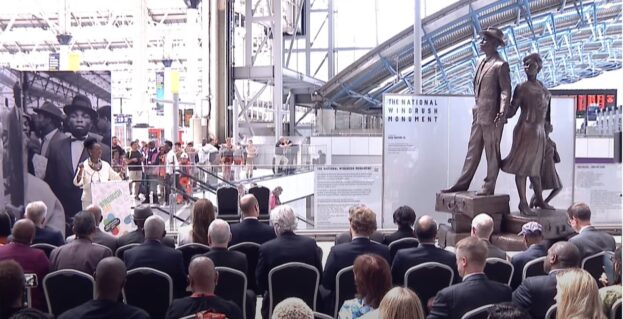 The three figures – a man, woman, and child – dressed in their “Sunday best” are climbing a mountain of suitcases together, demonstrating the inseparable bond of the Windrush pioneers and their descendants, and the hopes and aspirations of their generation as they arrive to start new lives in the UK.

“Seeing Basil Watson’s magnificent monument, it’s easy to imagine the excitement, hope and apprehension that the Windrush pioneers must have felt as they arrived in the UK

“Overcoming great sacrifice and hardship, the Windrush Generation and their descendants have gone on to make an immense contribution to public life. Britain would be much diminished without them.“

“This is a special moment in our nation’s history and I am grateful to all those who worked tirelessly to bring it into being.

“Basil Watson’s sculpture perfectly captures the spirit of Windrush. In it we see the strength, hope and expectation of those who arrived with little and yet gave so much.

“As a first-generation immigrant myself, the Windrush story resonates with me and it is important we recognise the contribution of those who have so enriched our country.”

The Windrush generation has come to be defined as those people who emigrated from the Caribbean to Britain between the arrival of the MV Empire Windrush on 22 June 1948 and the Immigration Act 1971.

Following public engagement in 2021, in which Basil Watson’s design resonated the most, he was commissioned to create the Monument by the Windrush Commemoration Committee (WCC), chaired by Baroness Floella Benjamin DBE DL. Basil worked collaboratively with a team at Pangolin Editions in Stroud, Gloucester to complete the monument.

The Monument’s location, London Waterloo station, was chosen due to its significance in the Windrush story as thousands of people who arrived from the Caribbean passed through the station on their way to start their new lives across the country.

The Monument was delivered by the Department for Levelling Up, Housing and Communities with the support of the Windrush Commemoration Committee, and UP Projects.

Thirty Five different projects across England are also celebrating the day providing community events and activities funded by share of £500,000 from the Windrush Day Grant Scheme.

2022 is the fourth annual National Windrush Day and this year’s projects will focus on bringing communities together – across different ages and ethnic backgrounds – to commemorate, celebrate and educate their local area about the contribution of the Windrush generation and their descendants across the country.

“The National Windrush Monument will be a permanent place of reflection, celebration and inspiration for Caribbean communities and the wider public, especially children.

“It will act as a symbolic link to our past and a permanent reminder of our shared history and heritage for generations to come. I hope it will be a catalyst for other monuments across Britain commemorating the extraordinary contribution to this country by the Windrush generation.

“I am grateful to the members of the Windrush Commemoration Committee for their boundless dedication to ensuring this monument comes to fruition, and hope the Caribbean communities who we have sought to serve, believe that we have done them justice.”

“It has been an honour to design and create this monument which pays tribute to  the Windrush generation migrants as they arrived in Britain with their dreams and aspirations, courage and dignity, skills and talents.

“They arrived with the idea of laying a foundation for their families and their future, and a hope of contributing to a society that they expected would welcome them in return.

“From this seemingly auspicious beginning despite many challenges, they spread their culture across Britain influencing many aspects of the society. “My parents, along with a great many others, took the long arduous voyage from the Caribbean with very little or nothing other than their aspirations, their courage and a promise of opportunity for advancement. This monument tells that story of hope, determination, a strong belief in selves and a vison for the future“

“We are deeply honoured to be able to host this wonderful monument at London Waterloo station – a place that has a very proud and rich connection to the Windrush generation. After arriving in Britain at Southampton port, thousands upon thousands of Caribbeans travelled to Waterloo before they started their new life across the country.

Many of course then went on to work and become part of our railway family, supporting the efforts to build new railways and connect communities.

“Waterloo is one of the capital’s biggest transport hubs, with millions of passengers passing through this station every year. To have this permanent monument displayed in this easily accessible station, that is right in the heart of London, is a real privilege.

For more information on the about the Windrush story and the memorial please visit a new website which will go live on 22 June : https://windrush-monument.levellingup.gov.uk/

Windrush Day 2022 – how are you celebrating

The distinguished and much celebrated Academic, Professor Sir Geoff Palmer, Professor Emeritus in the School of Life Sciences…