This year, BBM/BMC (BritishBlackMusic.com/Black Music Congress) offers fewer, but targeted events to mark British Black Music Month (BBMM), the annual June-July window it has been using to highlight domestic black music, create networking spaces and provide music industry education since 2006. It also revives the original Black Music Congress, which is a discussion forum started with monthly sessions at City, University of London in 2003.

BBM/BMC, which is the UK co-ordinator of International Reggae Day (IRD), has expanded on what was offered at last year’s Zoom meeting. His Excellency Mr. Seth George Ramocan, Jamaica’s High Commissioner to the United Kingdom, who participated in last year’s event, is expected to open this year’s International Reggae Day London UK event on July 1 with a video address.

The event will explore how Britain and Jamaica have influenced each other’s music industry and musical style. The conference’s UK theme: ‘New Cross Fire/Black People’s Day Of Action @ 40’/’BRAFA (British Reggae Artists Famine Appeal) @ 36’ sub-theme will highlight reggae’s engagement with historical moments both in the UK and abroad.

“BritishBlackMusic.com/Black Music Congress and its partners, including Reggae Fraternity UK, Shining Stars and Chaaawaaa Radio, are focused on delivering the London hub event, which once again, will be delivered via Zoom. This year’s IRD ‘One Love’ theme will run through our programme, especially within the extended DJ and live sets,” says IRD UK co-ordinator Kwaku.

“In addition, our conferences will highlight the influence of Britain on reggae music, and Jamaica’s bass culture influence on British popular music. We’ll also highlight the role reggae music played in social movements, such as the New Cross Fire and the resultant British African-led mobilisation of Black People’s Day Of Action in 1981, and the BRAFA (British Reggae Artists Famine Appeal) efforts in the Ethiopian famine relief campaign of 1985.” 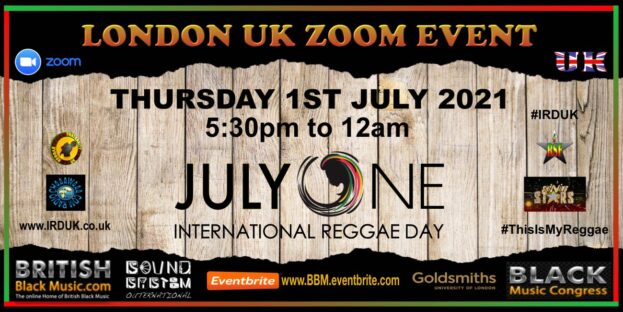 IRD London UK aims to become the networking forum for Britain’s reggae community. It is expected to return in a non-pandemic 2022 to Goldsmiths, University of London in south London, where it was last held in 2019 in association with Sound System Outernational. Additional information and updates will be posted at IRDUK.co.uk.

BBMM2021 ends on July 31 with ‘British History, Black Music, Racism & The Music Industry 1507-2020’, a video screening and discussion on black music history and racism. The forum aims to have an update on the music industry’s race-focused activity one year on from the Afriphobic murder of George Floyd last May. As a response to the various #BlackLivesMatter/#AfricanLivesMatter activities, several music industry organisations supported the #BlackOutTuesday campaign. The outcomes included pledging to diversity senior management representation, better engagement with minority communities, anti-racism and unconscious bias training, African history and culture programmes, and funding for African musicians and black music.

Before then, on June 10, black music stakeholders, from fans, musicians to industry practitioners, get to have their say about what the issues are within the domestic black music sector and the ways forward, at Black Music Congress 2021: ‘Sounding Off: What’s The Way Forward For British Black Music?’. A week later, on June 17, Dr Enrico Bonadio, Reader in Intellectual Property Law at The City Law School, joins us again for another Talking Copyright session entitled ‘Copyright And Producers In/Of Black Music’. It’s an opportunity for Dr Bonadio, Kwaku and special guests to lead a seminar on intellectual property rights of record producers and musicians, and how reggae and other black music genres engage with copyright.

The opportunity to learn more about the music industry continues on July 6 with ‘Musicians: Understanding Your Rights, Income Streams And Music Industry Alphabet Soup’. “We’re grateful to the Musicians’ Union for reaching out to co-organise this free event with us,” says Kwaku. “It’s open to anyone with an interest in developing a career in the music industry. It’s aimed particularly at the unsigned or do-it-yourself artist, musicpreneur, or those who provide artists, songwriters and producers with specialist support.”

There are two more opportunities to engage with the subject of reggae. On July 22, there’s an exclusive and rare screening of Sandra Krampelhuber‘s feature length documentary ‘Queens Of Sound’, which is followed by a forum that allows female voices to express themselves across various topics within reggae and dancehall music. It will be led by special guests drawn from Jamaica and Britain.

BBM/BMC is also supporting the Summerstown182’s Tooting Magical Musical History Tour! walk around south London on June 13. It also highlights a crowd-funding campaign in order to erect a plaque to the memory of the reggae music recorded at the old Mitcham Road, Tooting site of the defunct TMC Studio.

For details of the events and bookings: BBM.eventbrite.com.