It is marked by music and dance, suggesting a fluid, free-flowing space of expression as a woman moves gracefully in the vast expanse of a field. Unfortunately, when it comes to racial identity, the same freedom still remains a pipe-dream. 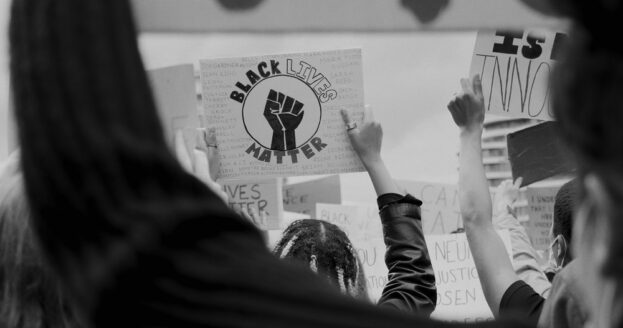 However, the black experience will not be obliterated by the weapons of a discriminatory few, becomes the overarching message of the narrative, with the reminder to take the first step, which might sometimes also mean looking within. No act of change, as small as it might be, is inconsequential, further asserts the film, leaving you with a poignantly moving sense of hope.

Guilhem is a video director and editor born from a Malian father and a French mother. Kid with multiple interests, his passion for film making was always there growing up but fully bloomed in his mid-20s. Along the way, his taste for new surroundings brought him to explore a few counties, then continents. Now based in London, his portfolio includes music videos, documentaries, promotional content and short films. Aesthetics enthusiast, he captures the beauty “the eyes can’t see” in the people and their environment.

A poem for Black History Month

Why are the youth of today intent on taking lives? Such scars left behind, both inside and out,…

FOOTPRINTS IN THE SAND by Feyisayo Anjorin

One minute, we watch your footprints in the sand, The next, we stop and stare and see you…

I WILL FIND YOU by Tolu’ Akinyemi

My shoes have lost their floors And my eyes riot from looking But till I find you, I…

Jamaal Richards: You Can

It is based on a conversation between the soul and brain of millions of Black people worldwide. The…

Still I Rise by Maya Angelou

Still I Rise” is primarily about self-respect and confidence. In the poem, Angelou reveals how she will overcome…