Katherine Johnson loved to count. “I counted everything. I counted the steps to the road, the steps up to church, the number of dishes and silverware I washed … anything that could be counted, I did.” And so it began for this young girl from West Virginia in the US . Born in 1918 in White Sulphur Springs, W.Va., Johnson’s love for mathematics was inherent, an inclination she had from birth. At a young age, she was ready and anxious to go to school. She can vividly remember watching her older siblings go to school and wishing so much that she could go with them. The opportunity to attend school finally did come. Johnson so excelled that she began her studies in the second grade, then moved into advanced classes. By age 10, Johnson was in high school.

In school, one teacher stood out to Johnson. Miss Turner taught geometry, and Johnson couldn’t wait to take her class. The teacher was a great encourager to the students and a strong mentor to many of them. Johnson did so well in her classes that she graduated early from high school, and at age 15 she entered West Virginia State College. She had two years before having to declare a major, so Johnson wavered between English, French and mathematics. One of her professors at West Virginia State College helped Johnson with her choice. She told Johnson, “If you don’t show up for my class, I will come and find you.” And so it was, through part threat and part joke, Johnson steered her way into what was already her first love: mathematics.

At West Virginia State College, Johnson became immersed in academia and the mathematics program. She loved being surrounded by smart people, she said, and knew all of the professors and students on campus. One of her professors, the renowned Dr. William W. Schiefflin Claytor, recognized the bright and inquisitive mind that Johnson had. “You’d make a great research mathematician,” he told her. Then professor Claytor did something else. He told Johnson that he would help her become one. Johnson said, “Many professors tell you that you’d be good at this or that, but they don’t always help you with that career path. Professor Claytor made sure I was prepared to be a research mathematician.” He saw that Johnson took all of the mathematics classes listed in the catalog that were needed to pursue her life’s passion, and even went so far as to create a class in analytic geometry of space just for her. At age18, Johnson graduated summa cum laude with Bachelor of Science degrees in mathematics and French. Johnson recalls of her professor, “Claytor was a young professor himself, and he would walk into the room, put his hand in his pocket, and take some chalk out, and continue yesterday’s lesson. But sometimes I could see that others in the class did not understand what he was teaching. So I would ask questions to help them. He’d tell me that I should know the answer, and I finally had to tell him that I did know the answer, but the other students did not. I could tell.”

Johnson ended up teaching after college; at that time, teaching was the only option for her in her community. She left teaching to marry and start her family. When her husband fell ill in 1952, she began to teach again. And then one day, at a family function in the 1950s, a relative mentioned to Johnson that the National Advisory Committee for Aeronautics, the predecessor to NASA, was hiring. They were specifically looking for African-American females to work as “computers” in what was then their Guidance and Navigation Department. In the 1950s, pools of women at NACA did calculations that the engineers needed worked or verified. Johnson immediately applied for the job, but the agency already had filled its quota for the year. By the time the next year rolled around, Johnson had applied again and found herself with two contracts on her table. One was a contract to teach, and one was to work for NACA. Remembering what professor Claytor had always told her about becoming a research mathematician, she took the job at NACA.

Johnson began working for NACA in 1953. Her work in the agency was a day-to-day progression. She started as one of the women who worked on problems assigned from the engineers in what was then the Guidance and Control Branch. As Johnson worked on the problems, she would ask questions. She didn’t want to just do the work — she wanted to know the “hows” and the “whys” and then the “why nots.” None of the other women had ever asked questions before, but by asking questions, Johnson began to stand out. She was told that women didn’t participate in the briefings or attend meetings; she asked if there were a law against it. The answer, of course, was no, and so Johnson began to attend briefings. NACA was just beginning its work on space. Space itself may be perceived as a series of plane surfaces, and as Johnson became known for her training in geometry, she began to work with the team more and more. Eventually, she became known as a leader, and the men increasingly relied on her. She remembers quite clearly her experience at the time. “The women did what they were told to do,” she explained. “They didn’t ask questions or take the task any further. I asked questions; I wanted to know why. They got used to me asking questions and being the only woman there.” It was this inquisitive nature that made her a valuable resource to the team and the only woman at the time to ever be pulled from the computing pool to work on other programs.

In 1957, Katherine provided some of the maths for the 1958 document Notes on Space Technology, a compendium of a series of 1958 lectures given by engineers in the Flight Research Division and the Pilotless Aircraft Research Division (PARD). Engineers from those groups formed the core of the Space Task Group, the NACA’s first official foray into space travel, and Katherine, who had worked with many of them since coming to Langley, “came along with the program” as the NACA became NASA later that year.

In 1960, she and engineer Ted Skopinski coauthored Determination of Azimuth Angle at Burnout for Placing a Satellite Over a Selected Earth Position, a report laying out the equations describing an orbital spaceflight in which the landing position of the spacecraft is specified. It was the first time a woman in the Flight Research Division had received credit as an author of a research report.

Then in 1962, President John F. Kennedy charged the country to send a man to the moon. Johnson became part of the team, and she began to work on calculating the trajectory for America’s first space trip with Alan Shepherd’s 1961 mission, an early step toward a moon landing. She went on to do the calculations for the first actual moon landing in 1969.

Johnson worked at the agency until 1986, when she retired after 33 years of service. During her tenure at NASA, Johnson received many prestigious awards. Among them were the NASA Lunar Orbiter Award and three NASA Special Achievement Awards. She was named Mathematician of the Year in 1997 by the National Technical Association. In addition to these NASA awards, Johnson has been honoured with an honorary Doctor of Law degree from the State University of New York and honorary Doctor of Science degrees from Capitol College in Maryland and Old Dominion University in Virginia. At the degree ceremony in New York, Johnson discovered at the last minute that not only was she an honouree, but she was also the keynote speaker. With her esteemed career to draw upon, Johnson rose to the occasion and spoke with the audience. She referred to it as a “chat” with the graduates. A 45-year-old relative of a graduate told Johnson after the ceremony that, because of her “chat,” she was returning to school the following fall to complete her degree. 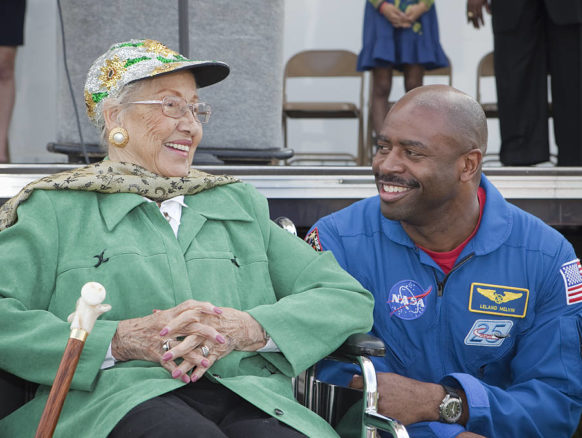 Today, Johnson is enjoying her retirement. She likes to travel, play bridge, watch sports and spend time with her family. She has participated in many panels and conferences, including the NASA Trailblazers and Legends STEM Conference in Cape Canaveral, Fla., in 2010. She often speaks to students about her own extraordinary career and encourages all of them to pursue STEM careers. Johnson tells them, “We will always have STEM with us. Some things will drop out of the public eye and will go away, but there will always be science, engineering and technology. And there will always, always be mathematics. Everything is physics and math.” Johnson has served on different panels and has heard from students who told her they decided to go into a STEM career after listening to her talk. She keeps in touch with NASA employees and will call on them, when needed, to help drive home the importance of STEM to audiences. At one recent event in North Carolina, Johnson mentioned to the students that she could get an astronaut to talk to them. The school hooked up her phone to the PA system, and they were able to have a conversation with astronaut Leland Melvin. In 2011, Johnson was honoured at the dedication of the Katherine G. Johnson Science Technology Institute at Alpha Academy in Fayetteville, N.C.

When asked if she still counts things, Johnson said, “Oh, yes. And things have to be parallel. I see a picture right now that’s not parallel, so I’m going to go straighten it. Things must be in order.” Geometry is still an important part of who she is, a fact evident as she began to talk about her father. She recalled him as “the tallest, straightest man in the area.” She loved her father a great deal, and he was a big influence in her life, teaching her many things. One lesson she has carried everywhere, taught to her own children, and let be a guide throughout her education, career and every other aspect of her life.

she is so cool thanks

very inspirational. I will be having my 10 yr old niece read this story today. Hopefully, this will influence her to go into STEM. Great job Mrs. Johnson

Dr. Patrice Baptiste: Paving the Way For The Next Generation of Black Professionals

There is no single way to qualify as an engineer. While all routes into the profession involve a…

Black History Month speaks with Bola Fatimilehin, Head of Diversity at Royal Academy of Engineering who is heading…